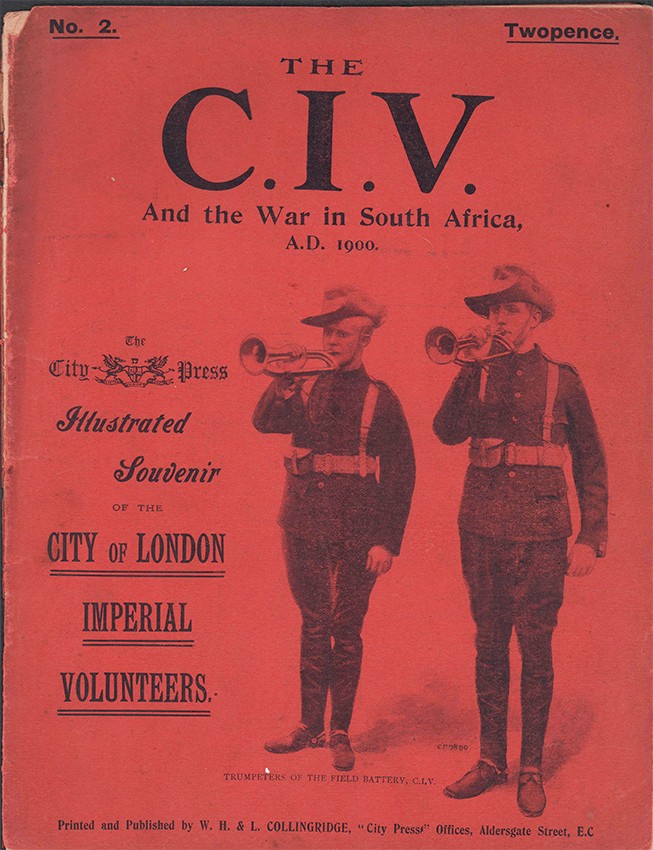 THE C.I.V. AND THE WAR IN SOUTH AFRICA

The "City Press" Illustrated Souvenir of THE CITY OF LONDON IMPERIAL VOLUNTEERS. No 2

C.I.V. Britain and the Colonies responded well to the call of the Government in December 1899, and London was not behindhand. The infantry Volunteers all over England and Scotland answered nobly, and the value of the services of the officers and men who went out was handsomely acknowledged by all the generals. Taken suddenly from civil life, they rapidly assimilated what extra teaching could be given before being thrown into the field, and when there, almost all became useful soldiers and took the hardships inseparable from active service with a minimum of grumbling.

The City Imperial Volunteers embarked on the Briton, Garth Castle, Ariosto, Gaul, and Kinfauns Castle between 16th and 21st January 1900. On 20th February the bulk of the Infantry Battalion left the Cape for De Aar and Orange River, in which district they took over various posts from the Regulars. On account of the rising in the Britstown district fighting was soon seen, and on 6th March 13 men were wounded, some of these being taken prisoners. On 31st March the battalion left De Aar for Bloemfontein via Naauwpoort. At the latter place they were detained and stayed some time. Ultimately, about 23rd April, the battalion got to the Free State capital, partly by road, partly by rail, and on the 24th were inspected by Lord Roberts. Within a few days they were put into the 21st Brigade under General Bruce Hamilton (see 1st Sussex), and thus formed a part of Ian Hamilton's army of the right flank, which did no little fighting on the way to Pretoria (see Duke of Cornwall's Light Infantry). http://www.angloboerwar.com/unit-information/imperial-units/542-city-imperial-volunteers