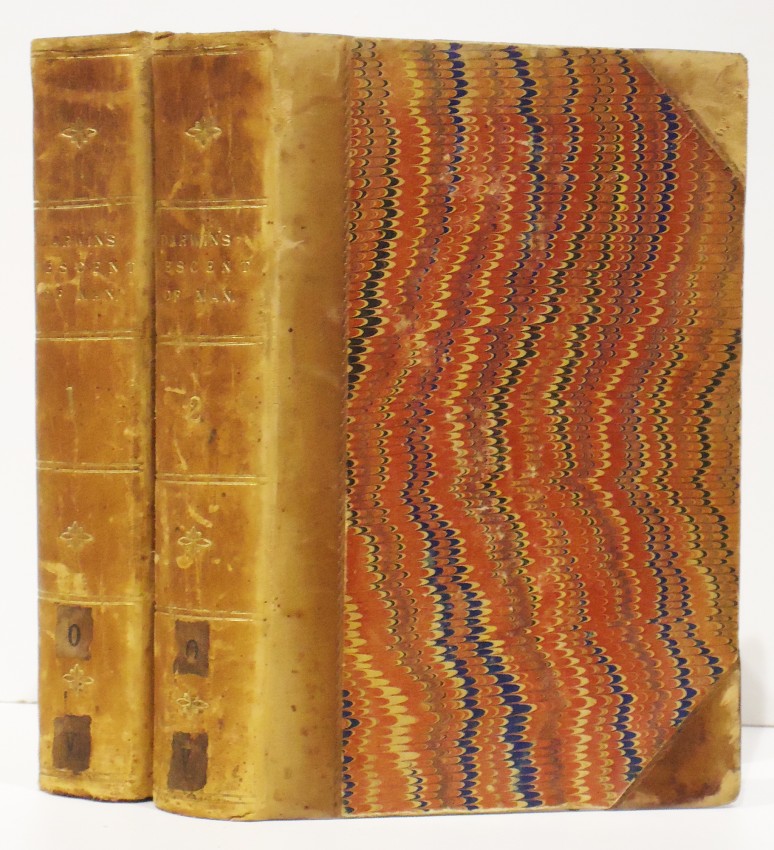 and Selection in Relation to Sex. In Two Volumes. With Illustrations.

First edition, second issue: 2 volumes: I. viii + 423, II. viii + 475, ex-library with the bookplate of English Rooms, Funchal on the front paste-down endpaper of each volume and a stamp on the page one of each volume, bound in half calf titled gilt on the spines and with marbled paper sides - the leather is dry and worn along the edges, without the half title pages and publisher's catalogue in volume II, full page and other wood engravings, light foxing and some staining throughout.

Freeman (R.B.) The Works of Charles Darwin, An Annotated Bibliography, Second Edition, Revised and Enlarged, Dawson, 1977, pages 128/129, This copy agrees with the points noted for the second issue a follows, 'The first edition is in two volumes and occurs in two issues which cannot be distinguished by their title pages, inserted advertisements or bindings. They have, however, important textual differences. The first issue can be recognized by the errata on the verso of the title leaf of Volume II, seventeen errata for Volume I and eight for Volume II. The verso of the title leaf of Volume II of the second issue has a list of nine other works by Darwin and no errata. The verso of the half title leaf of Volume II of the first issue bears the printer's note, but it is blank in the second. The first issue has a note on a tipped in leaf (pp. [ix-x]) in Volume II which refers to 'a serious and unfortunate error' which affects pages 297-299 in Volume I, and pages 161 and 237 in Volume II. In the second issue this leaf is absent and the relevant pages have been entirely reset. The easiest way to distinguish the two issues of Volume I alone is to look at the first word on page 297. It is 'transmitted' in the first issue and 'When' in the second. Both issues have sixteen pages of inserted advertisements for Murray's popular works in Volume I, and sixteen pages of Murray's standard works in Volume II, all dated January 1871. The first issue, of 2,500 copies, was published on February 24, and the second, of 2,000 copies, in March. Both cost £1. 4s. and were in standard bindings. The end-papers of the first issue are invariably, in my experience, dark green almost black; whilst those of the second may be the same, or dark brown.

The above descriptions refer to ordinary trade copies. Darwin's own copy of Volume I of the first issue, now at Cambridge, differs in three points and is, in my experience, unique. Firstly, it is dated 1870 on the title page; secondly the wording on the title page differs slightly from that of the trade edition; and thirdly the spine gilding of the case differs. These points are summarized under No. 936. It is known that Wallace.'