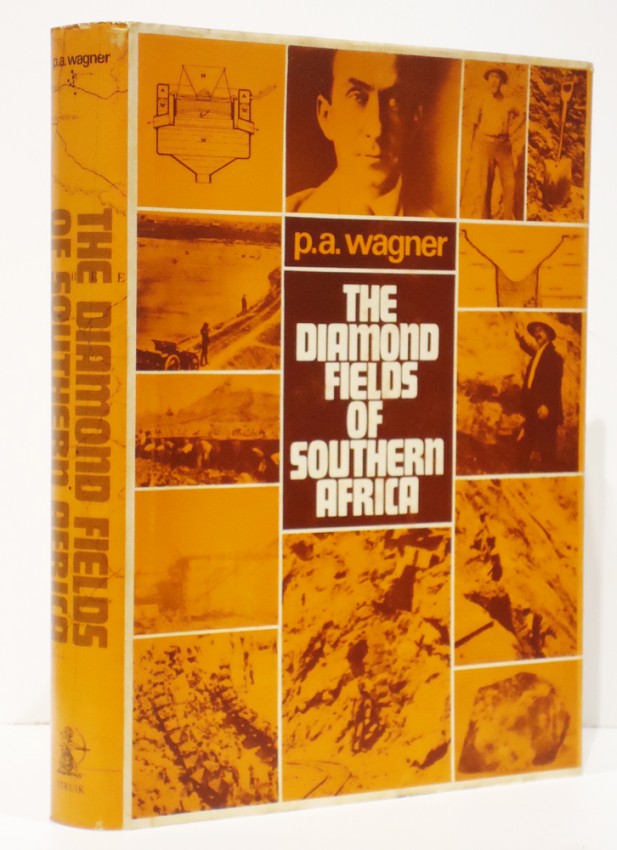 THE DIAMOND FIELDS OF SOUTHERN AFRICA

With maps and illustrations. 355 pages, frontispiece, black and white plates and illustrations, tables, charts, large folding map at the back. Mottled brown rexine binding, titled in brown on the spine, a very good copy in the dust jacket.

Percy A. Wagner, geologist, was the son of John M. Wagner and his wife Bertha Hoffa, both of German origin. He matriculated through the University of the Cape of Good Hope in 1902. During the next two years he studied at the South African School of Mines, then part of the South African College in Cape Town, passing the first mining examination of the University of the Cape of Good Hope in 1904. That year training in mining was transferred to the Transvaal Technical Institute in Johannesburg. Continuing his studies there he passed the university's second mining examination in 1905 and in 1906 was awarded both the Diploma in Mining Engineering and the degree Bachelor of Science (BSc) in Mining Engineering

Proceeding to Germany Wagner continued his studies at the Sachsische Technische Hochschule, Dresden, in association with the Konichliche Sachsische Bergakademie (Royal Mining Academy of Saxony) in Freiberg, which awarded him the degree Doctor of Engineering (D.Ing) in 1909. His doctoral thesis, Studien an dem diamandfuhrenden Gesteinen sudafrikas (Studies of the diamond-bearing rocks of South Africa) was published that same year as a book (Berlin, 1909, 207p).

He then became a consulting geologist and mining engineer. Among others he carried out geological investigations at Kimberley for De Beers Consolidated Diamond Mines and published a comprehensive overview, The diamond fields of southern Africa (Johannesburg, 1914, 347p; facsimile reprint 1971), which was for many years the most thorough and comprehensive study of the geology of the country's diamond mines. https://www.s2a3.org.za/bio/Biograph_final.php?serial=3015