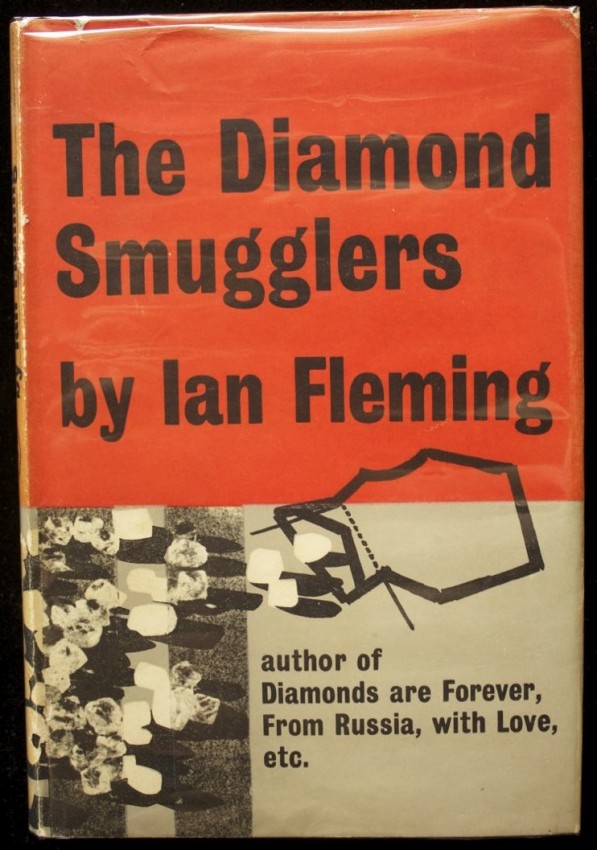 This is the first state with white titles on the spine. The second state of the first edition had gilt titles. Contents clean with some light foxing on the prelims. Former owner's name on front end paper. Jacket is price clipped and has some fading on the spine.

'If you know anything about Afrikaners you'll know that they are the worst sufferers in the world from verbal diarrhoea. They talk in torrents, and the more they talk, the more intoxicated they are with their own eloquence. When Karl sat down with a drink in his hand in the safe house and started talking, I was smothered in a jabbering cataract of words of which I could only understand about one in ten. Gradually, by banging on the table to stop him and firing questions which required only a "Yes" or a "No", I began to sort out the oral jigsaw puzzle, and in the end the effort was worth while.' - page 77.

From the front flap:

'A major campaign against the greatest smuggling racket in the world - the smuggling of diamonds from Africa, to the tune of some ten million pounds a year - has just been completed. It took three years, Paris was involved and Antwerp, Beirut, Freetown, Johannesburg - and Moscow. How this underground battle was waged is the greatest spy story since the war.

All the facts have come into the hands of Ian Fleming. He has been in Africa with the secret agent chiefly responsible for penetrating the international smuggling network. Ian Fleming has written this man's story: it is a true story, and breathtaking.'

From an excerpt of Steve McQueen's biography:

'Spy novelist Jeremy Duns revealed that Steve McQueen was considered for the lead role in a film adaptation of The Diamond Smugglers, written by James Bond creator Ian Fleming; McQueen would play John Blaize, a secret agent gone undercover to infiltrate a diamond-smuggling ring in South Africa. There were complications with the project which was eventually shelved, although a 1964 screenplay does exist.'