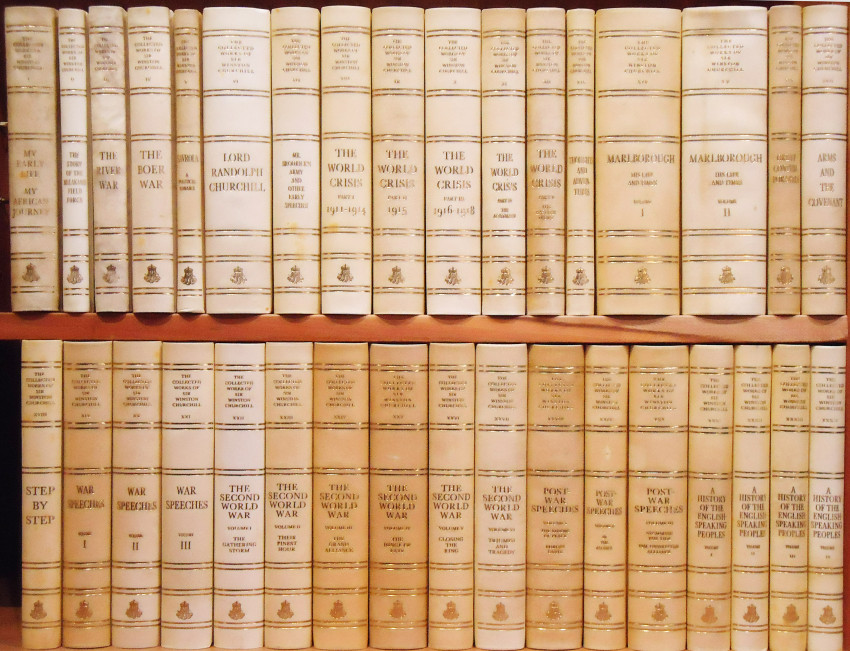 34 volumes, full vellum – some volumes toned as usual, gilt coat of arms on the upper covers and titling on the spines, all edges gilt, marbled endpapers, silk place markers, maps and illustrations throughout, a very good set but without the slip cases.

Cohen (Ronald I.) Bibliography of the Writings of Sir Winston Churchill, Volume I, pages 1098 – 1104. AA1. ‘According to the specifications announced by the Library of Imperial History, the first volume of the 34 anticipated was to be issued in January 1974 and, at a rate of one volume every three weeks, sets were to be completed by November 1975.

The earliest subscription form in have examined (of 4 February 1974, destined for a potential United Kingdom subscriber) indicated that the Collected Works were to be published “in a limited edition of 2000 sets within the British Empire and Commonwealth at the guaranteed price of £945 [in the United Kingdom; prices would vary elsewhere in the Commonwealth]”. The price of the set to American and Canadian subscribers was to be $2500 in their respective currencies. The edition was to be “strictly limited to 3000 sets word-wide” and the publisher declared that it was “expected that no more than 250 sets will, in fact, be available in Canada”. Sets were to be numbered from 0001 to 3000.

Ultimately the venture collapsed and the Library of Imperial History went into bankruptcy. According to Richard Langworth’s research, the print run never exceeded 2000 copies and only 1750 sets were ever published. Moreover, it appears that these were only bound as ordered. Langworth himself ultimately located the remaining unbound sheets and, with a colleague, arranged their binding and sale in vellum or full or quarter morocco.”

Library of Imperial History, in association with the Hamlyn Publishing Group Limited.