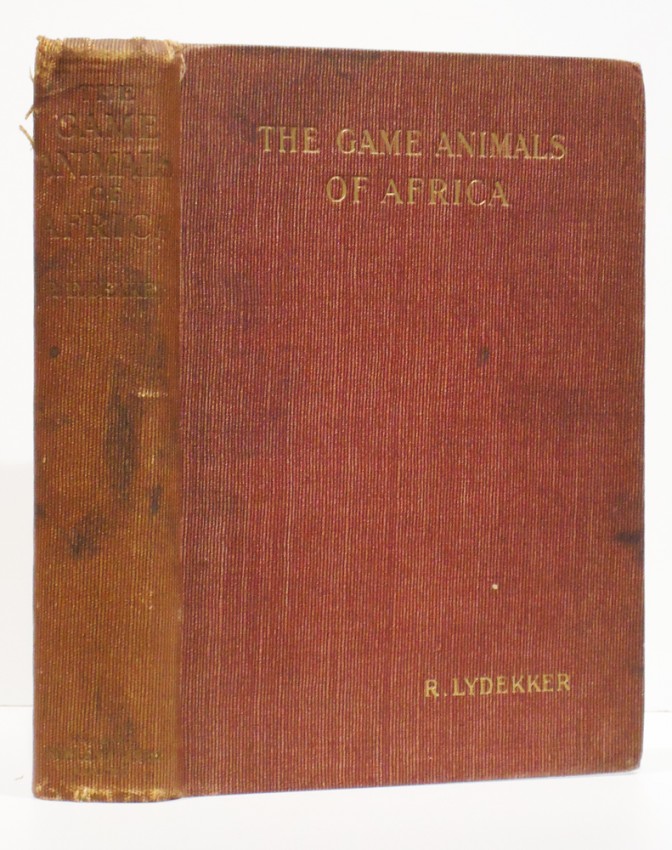 THE GAME ANIMALS OF AFRICA

Czech (K.) An Annotated Bibliography of African Big Game Hunting Books 1785 -1999 page 172: An excellent work that covers the natural history of both large and small game animals of Africa. Lydekker utilised segments of text he had written for the Great and Small Game of Africa with much new material added. Especially interesting are the hunting vignettes related by numerous sportsmen such as Selous, Neumann Powell-Cotton and others from books and journal articles.

The Times, Monday, April 19, 1915:The death has taken place at Harpenden of Mr. Richard Lydekker, well-known as a naturalist and geologist. He was born in 1849 and educated at Trinity College, Cambridge, where he took second place in the first class Natural Science Tripos of 1871, and joined the staff of the Geological Survey of India three years later. Mr. Lyddekker's scientific activities were maintained unwearyingly through the latter half of his life. He catalogued in 10 volumes the fossil mammals, reptiles, and birds in the British Museum; he collaborated with the late Sir W. H. Flower in The Royal Natural History (eight volumes), and with the late Professor H. A. Nicholson in A Manual of Palæontology (two volumes), and he contributed three numbers to Allen's Naturalists' Library and many articles to the Encyclopædia Britannica. He wrote a great number of learned monographs, but did not neglect appeal to the sportsman and the general reader, as is shown by such works as The Great and Small Game of India, Burma, and Tibet, Phases of Animal Life, and The Sportsman's British Birds and The Game Animals of Africa in 1908.