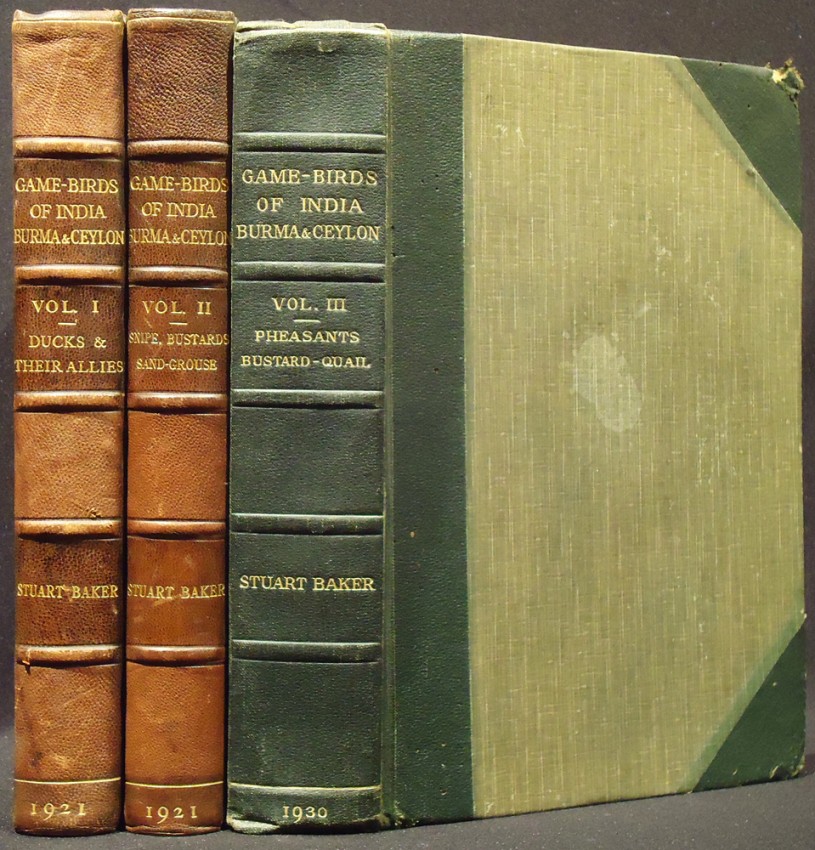 THE GAME BIRDS OF INDIA, BURMA AND CEYLON

3 Volumes: 340 + 328 + 341 pages, 60 colour plates by H. Grönvold, G. E. Lodge and J. G. Keulemans, 15 black and white plates, 2 maps, half green morocco with matching cloth boards, volume 3 half dark green cloth simulating the leather of the first two volumes) with sides of the same cloth as volumes 1 & 2, spines gilt, the leather on the spine in volumes 1 & 2 faded to brown, top edges gilt, others uncut, worm holes in the front endpapers of volume 3, the corners of this volume are rubbed and bumped, a good set.

Each volume has an additional pictorial title page.

Volume 1: The Indian Ducks and their Allies
Volume 11: Snipe, Bustards and Sand-Grouse
Volume 111: Pheasants and Bustard-Quail

Edward Charles Stuart Baker CIE OBE FZS FLS (1864 - 16 April 1944) was a British ornithologist and police officer. He was educated at Trinity College, Stratford-upon-Avon and in 1883 followed his father into the Indian Police Service. He spent most of his career in India in the Assam Police, rising to the rank of Inspector-General commanding the force. In 1910 he was placed on Special Criminal Investigation duty. In 1911 he returned to England and took up the appointment of Chief Police Officer of the Port of London Police, remaining in this position until his retirement in 1925.

For his services in this role during the First World War he was appointed Officer of the Order of the British Empire (OBE) in the 1920 civilian war honours. After retirement he became Mayor of Croydon. During his spare time he studied and collected the birds of India. His books included The Indian Ducks and their Allies (1908), Game Birds of India and Ceylon (1921), The Fauna of British India, Including Ceylon and Burma. Birds. (1922; eight volumes), Mishmi Man-eater (1928), The Nidification of the Birds of the Indian Empire (1932), and Cuckoo Problems (1942; the cuckoo was his chief interest within ornithology).

He made a comprehensive collection of nearly 50,000 Indian birds' eggs, part of which he donated to the Natural History Museum, where he spent a lot of time working on the egg collections from India and Thailand. His eight-volume contribution to The Fauna of British India, Including Ceylon and Burma series became the standard reference work on the subject. Part of the collection, about 152 specimens were sold to the private museum of the Tzar Ferdinand I of Bulgaria. He also served on government advisory committees on the protection of birds and was from 1913 to 1936 honorary secretary and treasurer of the British Ornithologists' Union.https://en.wikipedia.org/wiki/E._C._Stuart_Baker

FRANÇOIS LE VAILLANT AND THE BIRDS OF AFRICA

Paddle Your Own Canoe