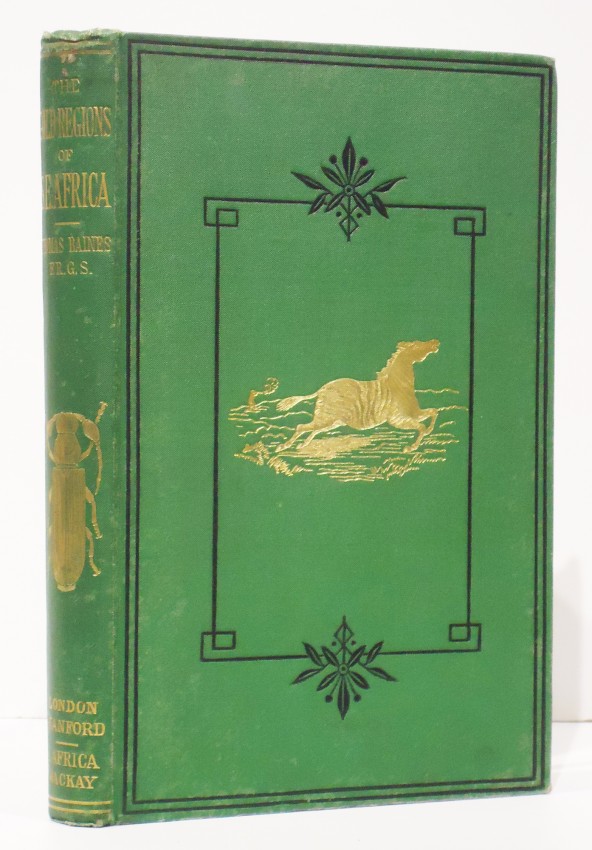 Accompanied by a biographical sketch of the author

First edition: 240 pages (including 51 pages of commercial advertisements at the end), frontispiece portrait - a laid down photograph of Baines, title page vignette, large folding map in pocket in back cover, 3 plates, folding facsimile letter, engraved illustrations in the text, original pictorial green cloth with a gilt vignette of a galloping zebra on the upper cover, light foxing on the title page and page edges, uncut edges, many pages unopened, a good copy.

Mendelssohn (Sydney) South African Bibliography, volume I, page 71. 'Mr. Baines was one of the earliest pioneers of that part of Africa now known as Rhodesia, and he obtained an important concession from Lobengula. Unfortunately his backers in Europe failed to procure the necessary working capital for the exploitation of the venture, and so the author missed making the large fortune acquired by holders of later concessions.

The volume is a most important work, and contains full information of every description upon the subject of the gold discoveries in Matabeleland and Mashonaland, with much curious knowledge of the inhabitants. It is evident that the author had formed a far higher opinion of Lobengula than was the case with subsequent explorers, and he appears to have been on excellent terms with the King, at whose coronation he was present.

The book also contains an account of the gold discoveries in the Transvaal, which were then confined to the Leydenburg district, and it is stated that the Boer farmers were afraid "lest the fame thereof should get abroad and the English Government should follow and take possession of the country." The author gives details of no less than nineteen routes from various places in South Africa to the newly discovered goldfields in the Transvaal and Lobengula's country, and there is a large map, in the compilation of which Mr. Baines was assisted by a number of well-known travellers and explorers, among whom were Chapman, Hartley, Elton, Mohr, and many others, and the volume contains a memoir of the author and several original illustrations.'