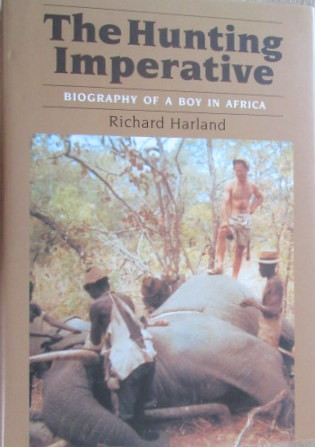 Richard Harland's extraordinary story is most unusual in that he began his big game hunting at a very young age, shooting his first buffalo at 14 accompanied only by a tracker. His aim was to become an elephant hunter which he did a year later under the direction of Paul Grobler. By the following year, Paul was sending him solo on elephant control, and recommended he become appointed as an honourary officer. This the game department did when Richard was 17 and still at school.

Richard realised the days of making a living by ivory hunting were over, and he joined the game department. He was posted to Gonarezhou in the south-eastern lowveld to control elephant and buffalo in the tsetse fly corridors. Years of incredible hunting followed which Richard describes wonderfully, along with many fascinating observations about the people and the environment during these times.

When this period came to an end, Richard spent some time catching dangerous snakes and 'milking' them for their valuable venom. He then became a safari operator, guiding clients in the Chirisa, Chete, Dande and Charara Safari Areas.

Richard condensed a lifetime of hunting into two decades. He undoubtably had a gift or instinct, and a passion, for hunting that is unequaled in this profession. He was born to hunt.