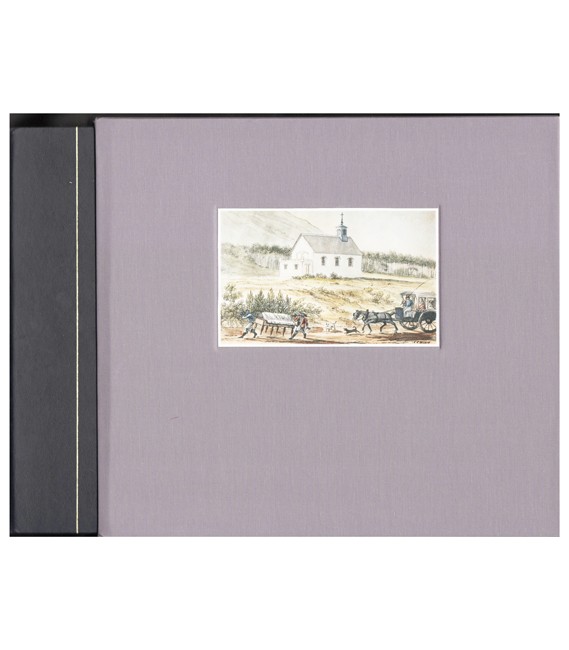 THE LIFE AND WORK OF CHARLES MICHELL. (Sponsors' Edition)

Sponsors’ Edition: 224 pages, frontispiece portrait, profusely illustrated in colour throughout, full black morocco, decorated with a gilt vignette on the upper cover and titled gilt on the spine, contained in a grey cloth-covered slipcase decorated with a plate-sunk illustration, a fine copy.

‘In this detailed and meticulously researched account of the life and work of Charles Michell, the first surveyor-general and civil engineer of the South African Cape Colony, author Gordon Richings examines in depth, the many interests and achievements of the man, as well as the essence of the time in which he lived, by referring to unpublished personal diaries, sketchbooks and letters that are in the possession of Michell’s descendants in England. Born in Exeter, Devon in 1793, Michell showed artistic talent at a young age, but due to family circumstances, joined the British Army and served with distinction in the Napoleonic Wars in Portugal.   He came to the Cape in 1829 and for the next twenty years played a crucial rôle in opening up the Cape interior to economic development and expansion, by designing roads, bridges and mountain passes, including Sir Lowry’s, the Houw Hoek, Montagu and Michell’s Passes. He also suggested improvements to Table Bay Harbour and designed lighthouses at Mouille Point, Cape Agulhas and Cape Recife in an effort to protect shipping along the Cape’s notorious coastline.

This first biography of Charles Michell is lavishly illustrated with his sketches, watercolours and engravings of Cape scenery, plants, insects and rock paintings, as well as Cape personalities, maps of the colony and architectural plans – the majority of which are published for the first time. New light is shed on the socio-economic life at the Cape, particularly the Tsitsikamma region of the southern Cape, the Frontier War of 1834-35, as well as on the personalities of Michell’s colleagues and contemporaries in England and at the Cape.

THE LIFE AND WORK OF CHARLES MICHELL is a beautifully produced work that pays tribute to a multi-talented man whose contribution and talents have been largely overlooked, and possibly overshadowed, by his more flamboyant and better-known contemporaries.’ Editor’s note.

The Sponsors’ Edition is limited to 26 copies signed by Gordon Richings. Tipped in is a hand-wiped and hand-coloured etching by Charles Michell, Chameleons at the Cape of Good Hope, printed from the original copper plate, numbered 7/26.

This copy is Letter G

GAMEBIRDS OF SOUTHERN AFRICA (Collector's Edition signed by the Author)

OUR COLONY OF NATAL

WE ACCUSE (Signed by Mandela)