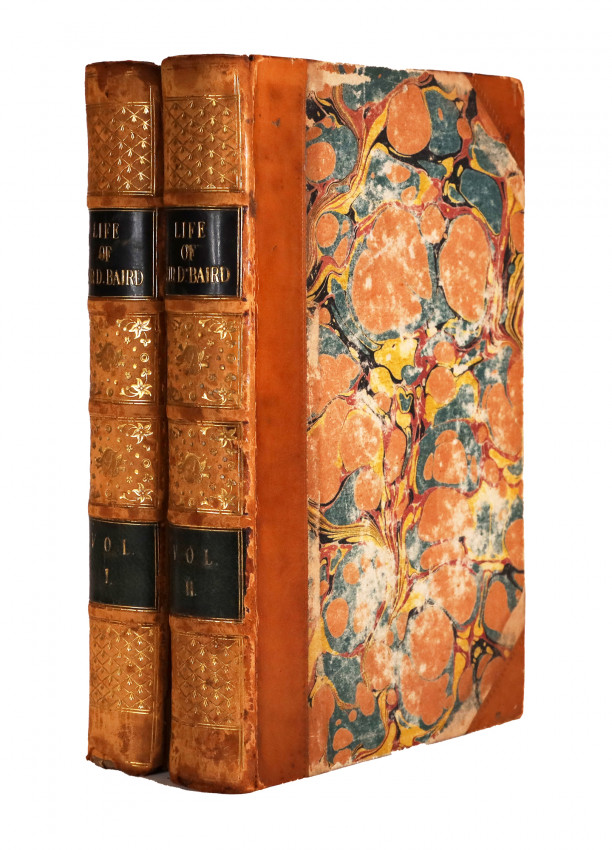 THE LIFE OF SIR DAVID BAIRD (Presentation copy by his wife)

The presentation inscription on a front free end paper in both volumes reads: A present from Lady Baird to William Stirling 1833

Mendelssohn (Sidney) South African Bibliography vol 1 pages 71 -72: Sir David Baird was born in 1757, at Newbyth, N.B., and entered the army as an ensign in 1772. The first visit he made to Africa was in 1779, on which occasion he remained at the Cape for three months, subsequently sailing for Madras, where he arrived in January 1780. He gradually rose in rank, and when, in October 1797, he re-embarked for South Africa, he had attained the position of Lieut. -Colonel. On his arrival at Cape Town he was appointed by Lord Macartney to the command of a brigade, with the rank of Brigadier-General, and he soon succeeded in bringing the regiments composing his force into a high state of discipline and efficiency. Soon after he was promoted to the rank of Major-General, at the same time receiving orders to proceed to India, taking with him the Scotch Brigade and the 86th Regiment. There is a full account of General Baird's services in India and Egypt up to 1803, when, being dissatisfied with his treatment by the Indian Authorities, he applied for leave of absence, and, receiving permission, sailed to Europe with a portion of his staff in the ship True Briton.

This ship, however, was detained at St. Helena for transport purposes, and General Baird and his officers transhipped to a South Sea whaler, which was captured by a French privateer, and sent as a prize to Bordeaux. The vessel was recaptured by H.M.S. Sirius, and the General reached England in safety. Nevertheless, owing to certain pledges given by him to his captors, it was thought necessary to give a French officer in exchange for him before his services could be honourably accepted, and this having been done he was placed on the Staff of the Eastern District, under Sir James Craig. In July 1805 he was put in command of the expedition fitted out with a view of capturing the Cape of Good Hope, where he arrived on January 4, 1806, when he succeeded in bringing about the capitulation of Cape Town, and the surrender of General Janssens and his forces on January 19th. There is a full account of the military operations culminating in this important event, as well as of the circumstances under which he assisted Sir Home Popham in his attack on the Spanish Settlements, an act which led to his recall on July 26, 1806. He sailed from Cape Town on the 19th of January 1807, leaving South Africa with many expressions of goodwill and gratitude from the English and Dutch inhabitants. Soon after Sir David Baird's arrival in England, he was attached to the army operating in the Danish Campaign, and he afterwards took part in the Peninsular War. After a stirring and distinguished life, in the course of which he received many honours, he died on August 18, 1829.

Sir David Baird's Monument : A hill-top memorial to General Sir David Baird (1757 - 1829) located at the summit of Tom a' Chaisteil to the south of the A85 Trunk Road between Comrie and Crieff. Built in 1832 on the instructions of his wife, the monument comprises a grey granite obelisk, some 25.6m (84 feet) in height, with panels providing a lengthy exaltation of Baird's character and recording his victories. It was the work of William Stirling (1772 – 1838) Baird owned the Trowan Estate within which the monument sits.
https://www.scottish-places.info/features/featurefirst91833.html

The Lives of the Noble Grecians & Romanes

THE MOST INTERESTING AMERICAN.

Freak Show Man. the Autobiography of Harry Lewiston as Told to Jerry Holtman