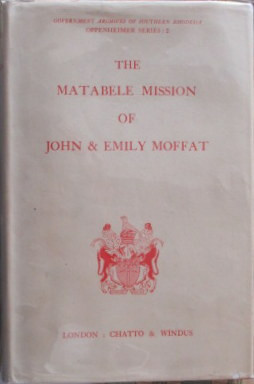 A Selection from The Correspondence of John & Emily Moffat, David Livingstone and Others 1858-1878

The present volume in the Oppenheimer series consists primarily of a hundred and thirteen letters pertaining to the first European settlement in Matabeleland, the London Missionary Society's station at Inyati. They are among the Moffat papers in the Government Archives, Salisbury, and are made up as follows:

(1) Twenty-two letters from David Livingstone, the prime mover in the establishment of the Inyati mission.

(2)The indenture or legal contract between Livingstone and his brother-in-law, John Smith Moffat, in which the former made financial provision enabling the latter to undertake mission work in either Matabeleland or among the Makololo.

(3) Letters from Emily Moffat, John Smith Moffat's wife, principally to her father, Jonah Stephen Unwin, tea merchant of Brighton. They include four attempts to write a journal, but the endeavour broke down under the stress of work and ill health. A few letters to others of her kin in England are also included.

The originals of some in this and the section next following are not extant, but are found copied by J.S. Unwin who was wont to transcribe his daughter's letters, along with a few from her husband, into exercise books, apparently for circulation among Brighton friends. Letters taken from these transcripts are marked with an asterisk.

(4) Letters from John Smith Moffat to his father-in-law, J.S.Unwin.

(5) Remnants of J.S. Moffat's jounals. He kept a full and valuable diary which, after copious extracts had been reproduced in R. U. Moffat's "Life", was almost completely suppressed. The extant remains show how great a loss early South Rhodesian history has suffered thereby.

(6) Letters from J.S.Moffat to his parents at Kuruman.

(8) Four letters from Thomas Morgan Thomas and William Sykes to the L.M.S. relating to the latter days and death of Moselekatse.

(9) A passage from T.M.Thomas's notes describing the alleged destruction of Moselekatse's remains by fire.

(10) An appendix of five letters bearing upon an attempt to establish a postal service between the Cape, Kuruman, Inyati, Linyati, Lake Ngami, and Inhambane.