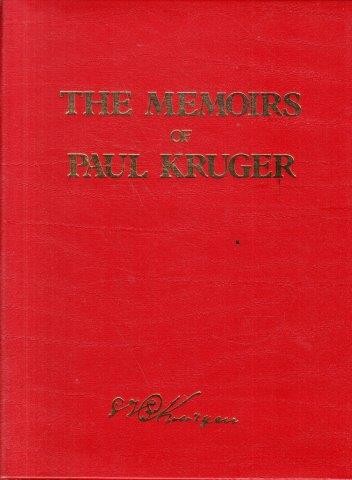 The Memoirs of Paul Kruger

as told by himself to H.C.Bredell and Piet Grobler

Paul Kruger was born at Vaalbank, in the Colesburg district of the Cape Colony, on October 10th, 1825, and trekked with his parents to Magaliesberg in 1834-5. At the age of sixteen he obtained two farms, and in 1842 he married Miss Maria Du Plessis, who died in 1846, after which he married another lady with the same surname, a Miss Gezina Suzanna Frederika Wilhelmina Du Plessis. Some account is given of his early life, and it is stated that he was made a deputy field cornet in 1842, and elected a full cornet ten years later, and that he accompanied General Pretorius on the occasion of the signing of the Sand River Convention. He also took part in the campaign against Secheli, in the course of which Livingstone's mission-house and its contents were destroyed or confiscated, and he asserts that the missionary had broken the convention, and had been assisting the natives against the Boers.Details are given respecting the disputes between the leaders of the Free State and the Transvaal and of the  civil war which ensued from 1861 to 1864, which was brought to a close about the time that Brand was elected President of the Free State, Kruger being appointed Commandant-General of the Transvaal at about the same period. He did not, however,  lead the Boers in the Sekukuni campaign, which was by no means successful: the Burghers refused to pay the war-tax, and Sir Theophilus Shepstone, who, it is stated, " was...waiting to see how he could put the English plans for the annexation of the Republic into execution," asserted that the Boers were in a state of rebellion and the country bankrupt, and formally annexed the Transvaal despite the protests of Burgers, on Jan. 21st, 1877. Later on Kruger and Jorissen were sent to England as a commission to protest against the annexation, and they left in May 1877, and the former denies that he had promised Shepstone to "become a loyal subject of the New Government....if the deputation failed." In 1878 Kruger once more went to England, this time accompanied by Joubert, and their efforts were again doomed to failure.There is an account of what is called " The Interregnum," under the British flag, but not a word is mentioned of the fact that Kruger took the pay of the British Government during part of this period. Some particulars are afforded respecting the Boer War, 1880-1881, and it is recorded that when the negotiations with Sir Evelyn Wood were proceeding, that General " did his utmost to get off with verbal assurances," endeavouring to prolong the armistice, and refused to sign, whereupon, says Kruger, " I cried 'Burghers, saddle," upon which Wood " gave in and signed."In 1882 Kruger was elected President, and in the course of this term of office had a war with Mapoch: and there is some account of the dispute about Bechuanaland, and of the meeting between Warren, Rhodes, and the President at Fourteen Streams. The next matter of importance was the commission to England in 1883, when Du Toit, Smit, and Kruger succeeded in bringing about the 1884 convention; the President maintained that " the hateful suzerainty was repealed," and asserts that he himself stated in the next Volksraad that it had ceased to exist, and that " It never occurred to England to contradict this statement."It is admitted that the Republic was again in very low water in 1885, but a year later the position was altogether changed in consequence of the discovery of the Witwatersrand Gold Reefs. In 1887 the first attempts at closer alliance with the Free State were made, but President Kruger failed to impress President Brand with his views; in 1888, the former was re-elected by a large majority, and Dr, Leyds was appointed State-Secretary. Kruger asserts that he did everything in his power to conciliate the Uitlanders as long as it was not to the detriment of the Republic or the older Burghers, and he maintains that the Second Raad was a real force in the country, and that its decisions were only overruled on one occasion. His third term of office commenced in 1893 after a close contest with Joubert, and there is some account of the "commando" incident, and of Sir Henry Loch's visit to Pretoria.Kruger remarks that the High Commissioner's "public attitude was .....perfectly correct," but his private action was "characteristic of the entire English policy in South Africa. Lies, treachery, intrigues, and secret investigation against the Government." Reference is made to the " Drift Question" and the Jameson Raid, and it is maintained that " the British Government, or at least the Colonial Secretary was fully informed of Cecil Rhodes' plans and intrigues," while it is denied that anything of the kind was suspected by the Transvaal authorities...It is asserted that, "the attempt upon the independence of the Republic having failed, Chamberlain prepared to attain his object by a "gigantic British Raid," and at this stage the Republic determined to prepare for emergencies by purchasing ammunition, rifles and guns. There is a full account of the negotiations, despatches and correspondence with Chamberlain, and of the conference with Sir Alfred Milner, who is described as " the typical Jingo, autocratic beyond endurance, and filled with contempt for all that is not English."The grievances of the Uitlanders are discussed and explained away, and it is stated that Chamberlain and Milner hurried on the crisis, fearing that reforms would be granted before their plans were ripe. Mr. Kruger does not follow " the course and vicissitudes" of the campaign but gives some particulars of his departure from Pretoria, his life in the railway carriage at Machadorp, his residence at Wanderval Onder, and his departure for Europe. There is a description of his reception in various parts of the continent, and of his residence in Hilversum, where he received the news of the death of his wife. The volumes record the life of the President up to the time of the proclamation of peace in 1902.