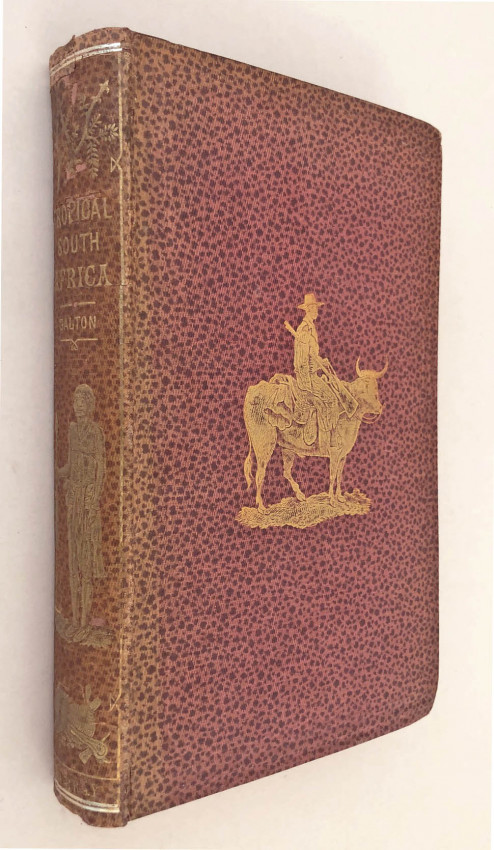 THE NARRATIVE OF AN EXPLORER IN TROPICAL SOUTH AFRICA - INSCRIBED COPY

The uncommon first edition of this title in the original light purple speckled gilt decorated cloth (elsewhere described as brown), by the multi talented Sir Francis Galton. 8vo. 314 pages plus xiv pages of prelims, tinted  lithographic frontispiece, coloured folding map of Damaraland with an inset of  Africa at the rear, 3 tinted lithographic plates, 1 full page engraved plate of Nangoro  King of the Ovampo, 4 engraved illustrations in the text. Original rust/orange endpapers.  Presentation  copy inscribed by the author on  a preliminary blank flyleaf to Sir Roderick Murchison. Murchison’s ex-libris on the front pastedown and a later owner’s ex- libris also present.

Mendelssohn SAB states: The first edition of a very reliable account of an expedition to  Damaraland and Ovampoland 1850-1852. The author was fortunate in finding so experienced a traveller as C.J. Andersson to accompany him.

A very good copy of this title, unusual to find inscribed and especially to someone of great significance. Both endpapers have some matching paper reinforcements along the hinges. The front free endpaper has some offsetting from the ex-libris. The folding map at the rear has some light fraying of the fore edge. Otherwise the book is internally very clean and lacking any foxing.

Sir Francis Galton, FRS (16 February 1822 – 17 January 1911), was an English Victorian era statistician, polymath, sociologist, psychologist, anthropologist, eugenicist, tropical explorer, geographer, inventor, meteorologist, proto-geneticist, and psychometrician. He was knighted in 1909. He produced over 340 papers and books. Despite his remarkable achievments in many spheres, he is probably most widely recognised as the inventor of fingerprints and as the  author of the seminal work on this topic.

Sir Roderick Impey Murchison, 1st Baronet, KCB, FRS, Hon FRSE, FLS, MRIA (1792-1871) was a Scottish geologist who first described and investigated the Silurian system. The crater Murchison on the Moon and at least fifteen geographical locations on Earth are named after him.

Apart from its importance as an early expedition from South Africa to South West Africa,  this book is of importance as it bears a presentation inscription from one Fellow of The Royal Society to another.