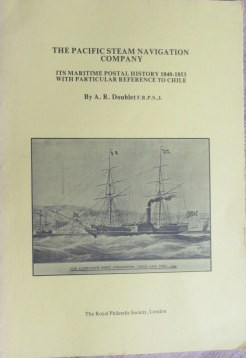 It's Maritime Postal History 1840-1853 with particular reference to Chile

This edition limited to 1000 copies.

It was the acquisition of several letters carried by the P.S.N.C.bearing the ship letter mark VAPOR..../ P, which lead me to the initial research resulting in this monograph. I wanted to find out why, when and where these marks were applied and thought the early Chilean and Peruvian consular records might provide the answer, as the British representatives in those parts frequently sent back information on all aspects of trade and commerce. The only reference I found to the use of the mark, however was in the Chilean Decree of November 1842. This discovery stimulated my efforts to find out more, and as many researchers discover in the course of their work, one thing leads to another, with the result that this monograph has become much wider in scope than I had originally intended.

I have still not found all the answers to my original questions, but in the process of delving into records of various kinds, I have discovered many facts relative to the early postal history of the company hitherto unpublished. Apart from the VAPOR mark itself, there are many questions left unanswered. Some of the answers I am sure, might well be found in contemporary issues of El Mercurio, the Valparaiso periodical which always included many details of local shipping news. Unfortunately  copies of the paper are not available in this country. Nevertheless I hope this monograph will stimulate the interest of other postal historians, and that more information will be forthcoming as time goes on. In this context, Harry S. Porter, author of Cancellations and Postmarks used with the Imperforates of Chile referred to in this monograph,ended his article with these words." These notes are chiefly compiled with the idea of eliciting further information from others who have studied the subject." Some twenty years later he complained, somewhat bitterly, that only one person had written to him. I hope I may be more fortunate!