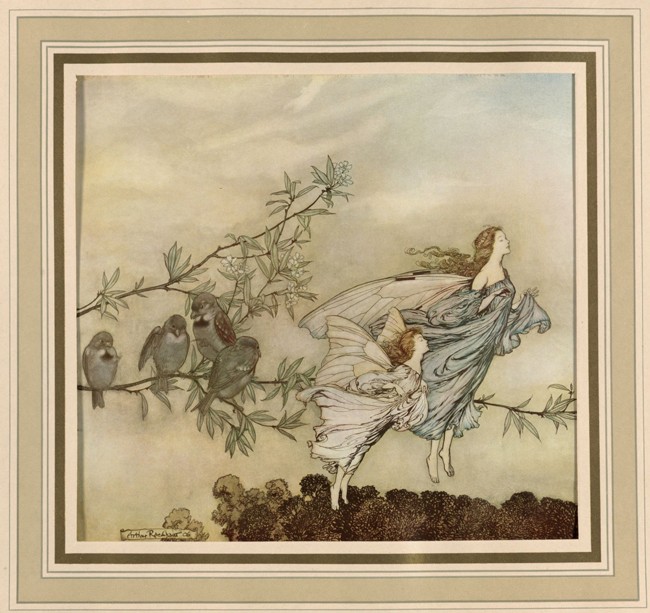 By Arthur Rackham, from “Peter Pan in Kensington Garden,” by J.M. Barrie.

Twelve large proof-size plates in colour mounted in mats each with guard page with the title of the plate, the plates vary in size, the mats measure 545 x 495 mm. Bound in light green cloth with vellum back and corners (slight damage at the bottom left hand corner), lettering on the cover in gold, the ribbon ties are no longer present. The plates and mats are crisp, the guard pages are slightly rippled.

Contained in the publisher’s original cream board box which is soiled and worn around the sides with some loss.

Signed for the publisher, Hodder & Stoughton and the engravers and printers, Henry Stone & Son, Ltd.

Briggs Latimore (Sarah) and Clark Haskell (Grace) Arthur Rackham: A Bibliography, (1936, reprinted 1987), pages 39/40, ‘These same pictures appeared in the 1906 edition, but they were  much smaller. This edition is limited to 500 copies numbered 101 to 600. Signed by the publishers, engravers and printers. A few of these portfolios had every plate signed by the artist, but Mr. Rackham advises that he signed only about twenty. There were supposed to be 100 signed. French and American editions followed in 1911 and 1914.’