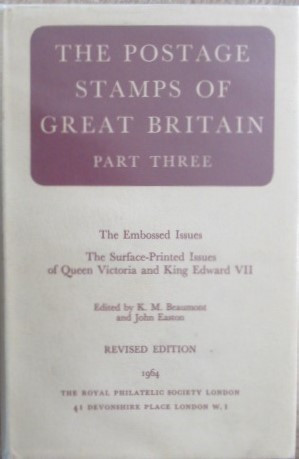 The Surface-printed Issues of Queen Victoria and King Edward VII

During the ten years since the first edition of this book so much new information has come to light concerning the surface-printed stamps of Queen Victoria and King Edward VII that the additions and revisions now incorporated have doubled the content of that original edition. An important source of information was the De La Rue History, published in 1958, which made available evidence revealing that a number of conclusions held hitherto were in fact inaccurate.

The chapters dealing with the Embossed and Edwardian issues have been revised and the Victorian chapters completely reconstructed to present the full philatelic history of these stamps in chronological order. There are now fifteen full-page plates illustrating essays and proofs and, new to this edition, fifteen of the Wright and Creeke plate and paper diagrams in two colours.