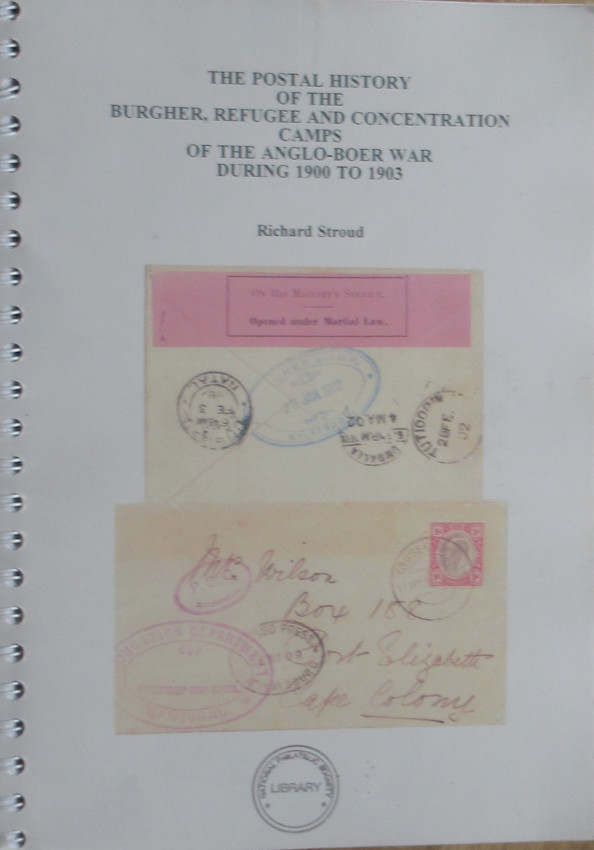 The Postal History of the Burgher, Refugee and Concentration Camps of the Anglo-Boer War During 1900 to 1903.

The work that has been published in recent years by the Anglo Boer War Philatelic Society is of a high and academic quality, and it is very, very informative.  This I discovered when a modest Joh Groenewald introduced me to the research published on Wolmaransstad, Schweizer- Reneke, Machadadorp, Rustenberg, Pietersburg and Lydenburg. In fact, a new world was opened up to me, a historian who has been involved in research on the Anglo-Boer War for almost forty years.

And now, Richard Stroud has done the Anglo-Boer War Philatelic Society proud with his publication on the postal history of the black and white concentration camps of that devastating war that raged over South Africa more than a hundred years ago.

A good start to judge a history book is to look at the sources consulted. Is that standard work that gives insight and a solid background there? Secondly has there been substantial archival research? And the answers? Yes, the standard work on the concentration camps is there-  the late S.B. Spies's Methods of Barbarism? (Human and Rousseau, Cape Town, 1977)- without which no clear understanding of the topic is possible. And yes, the author has done a great deal of archival research, to lend validity to his arguments and data.

However , it was when I started to read the manuscript that I realised the importance of Richard Stroud's work. There is no bias, which is in itself rare in a book on the concentration camps of the Anglo- Boer War. The text is highly readable and stimulating. But above all, it is - to use the phrase again - very, very informative, and clearly illustrates the author's superb knowledge of the topic.