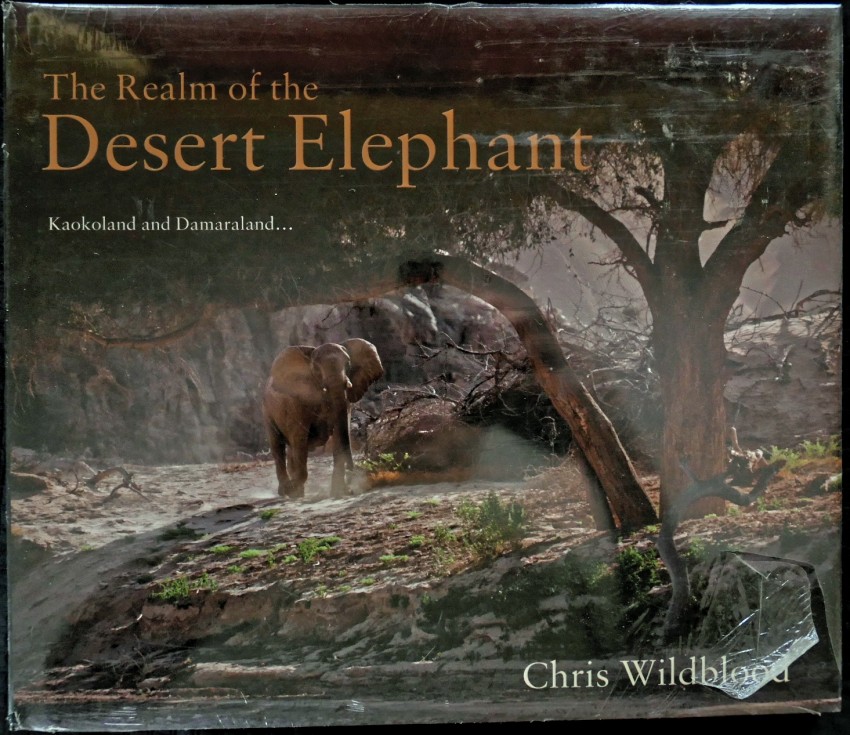 THE REALM OF THE DESERT ELEPHANT - KAOKOLAND AND DAMARALAND

'Chris Wildblood's spectacular book The Realm of the Desert Elephant captures not only the elusive desert elephants in their natural habitat, but explores the ancient lands of Kaokoland and Damaraland. Chris Wildblood  The Realm of the Desert Elephant is an exquisite tribute to the beauty of this wonderful and unique region. Namibia is a large country with an area of 825,418sq km making it over twice the size of Germany and three and a half times the size of the United Kingdom. The name Namibia is derived from the Namib Desert, considered to be the oldest desert in the world, and the name 'Namib' comes from an ancient word meaning 'barrier'. Tucked up in the north west corner of the country, bordered by the Kunene river in the north and the Skeleton Coast lining the South Atlantic Ocean to the west lies the Kunene Region, formally known as Kaokoland and Damaraland. For those that have been luckily enough to have visited the region, these names conjure up images of harsh unforgiving mountains, their rocks torn apart by the savage heat, beautiful lush green landscapes after the rains, the magnificent Kunene river that flows perennially in the north, the wonderful unique wildlife and the home of the Himba. 'Damaraland' is the southern of the two regions and is the relatively 'gentler' one of the two. It has a reasonable infrastructure of roads, electricity, water supplies to towns and villages, cell-phone coverage is marching forever onwards, old gravel roads are being replaced by new tarmac 'highways' and good shops, where supplies can be found, in most of the larger communities. The scenery is beautiful, from the rocky plains with their special black rhino of the Palmwag area to the west, the table-top mountains that give Etendecka camp its name and the lands to the west of Etosha that is Hobatere with its rich diversity of wildlife. To the north of 'Damaraland' lies 'Kaokoland'. Officially this starts at the Hoanib river which dissects the country east to west, trying to reach the South Atlantic when in flood, but failing, due to the relentless march of the dunes of the Skeleton Coast. You don't really notice the transition travelling between the two but once there, you know you are somewhere special. Here you are on your own. 'Kaokoland' is possibly the most unspoilt, untouched wilderness of Sub-Saharan Africa. Even the Serengeti has been shaped by mankind over thousands of years. It is not a National Park, but due to its harsh conditions, lack of infrastructure and inaccessibility, it doesn't need to be (yet). However, it does need to be looked after and not overexploited. If the idea of damming the Kunene for hydroelectricity (whether good or bad) ever comes to fruition, then it's remoteness will be lost forever. Here the animals live as they have since time immemorial, they follow the rains, springs and the foliage of the ephemeral riverbeds that sustain them, occasionally coming into conflict with humans, but usually coming to some kind of an amicable acceptance or understanding. The Himba people have learnt to live here as well, after moving back from Angola after the war, and co-exist with the wildlife, although the elephants tend to irritate them when they eat all their crops. Kaokoland is unforgettable and totally unique. Whether you are in the Hartmann valley or the Marienfluss for the scenery, on the Kunene river looking for the elusive Cinderella waxbills or relaxing at Epupa falls, exploring the dry riverbeds from Purros searching for the elephants or desert lions, it will not disappoint. The land has been formed over millennia. Colossal tectonic and volcanic forces millions of years ago formed a land that makes any geologist think they have gone to heaven.'