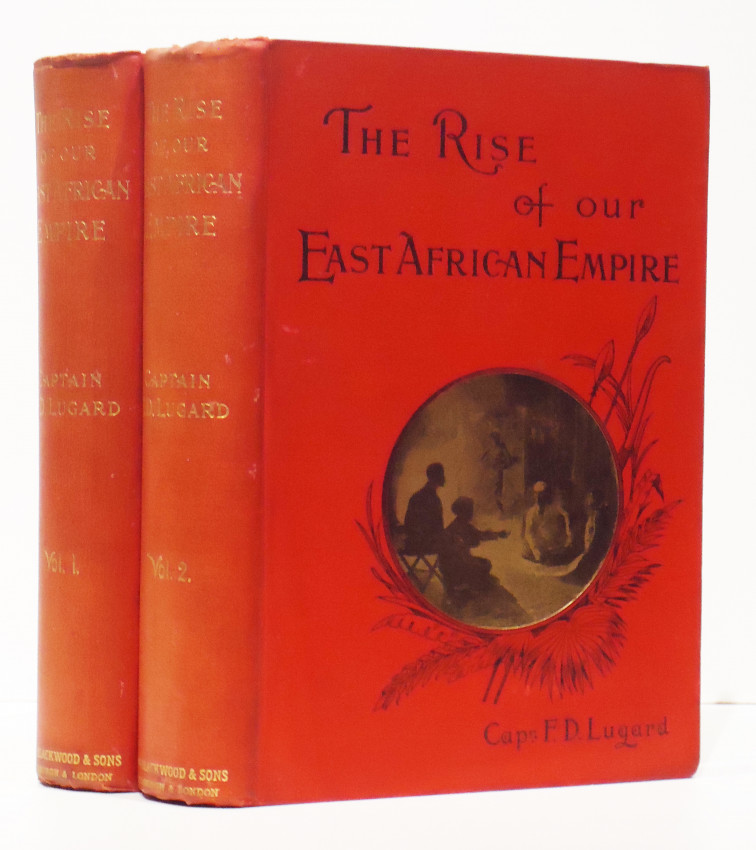 THE RISE OF OUR EAST AFRICAN EMPIRE

Early Efforts in Nyasaland and Uganda

First edition: 2 volumes, 563 + 682 pp., 13 maps - 9 in colour - 2 in pockets in the front and back cover of volume 1, frontispiece in each volume, numerous plates and text illustrations, original pictorial red cloth with vignettes on upper covers, titled gilt on the spines, uncut fore-edges and top edges, a very good set.

Frederick John Dealtry Lugard, 1st Baron Lugard (1858-1945), was a British imperialist and colonial administrator in Africa. He made significant contributions to the theory and practice of the British colonial policy of indirect rule.

In 1890 he went to Mombasa, where he was employed by the Imperial British East Africa Company to open a trade route to Buganda. Lugard remained in the interior of East Africa for 2 years, where, through a combination of diplomatic skill and military force, he established the suzerainty of the company over the region of present-day Uganda. During this time the company decided to withdraw from Buganda, a decision Lugard chose to ignore. He returned to England and launched a political campaign designed to convince the government to annex Uganda. In England, Lugard was criticized for his activities in Buganda, particularly for his treatment of French missionaries. Therefore, in defense of himself and in advocacy of his imperial vision, he published his first book, The Rise of Our East African Empire (1893), an autobiographical account of his activities in Nyasaland and Uganda.
https://biography.yourdictionary.com/frederick-john-dealtry-lugard