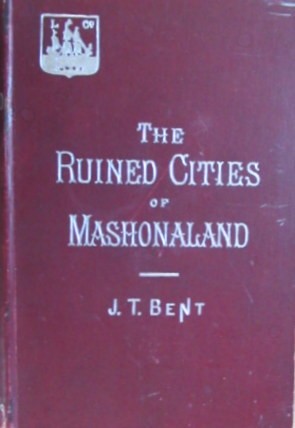 Being a Record of Excavation and Exploration in 1891.

Mr Bent made a careful examination of the remains of the ancient buildings in Mashonaland, as was of opinion that they were erected by Arabians, a race of North African explorers, whose civilisation must have been of a high order; and he expressed great admiration for the beauty, solidity, and intricacy of the masonry.

It is stated that although these ruins have been commented on by various authors as far back as the sixteenth century, they all seem to have been written from hearsay, with the exception of Carl Mauch, who visited in 1871. The author investigated the habits and industries of the Mashonas, and the work not only deals with Mr Bent's archaeological researches, but serves as a pioneer book on Mashonaland under the Chartered Company.

With a chapter on the Orientation and Mensuration of the Temples, by R.M.S. Swan

Dark maroon boards with silver blocking to upper board, and silver lettering to spine.

Path of Blood. The Rise and Conquests of Mzilikazi, Founder of the Matabele Tribe in Southern Africa