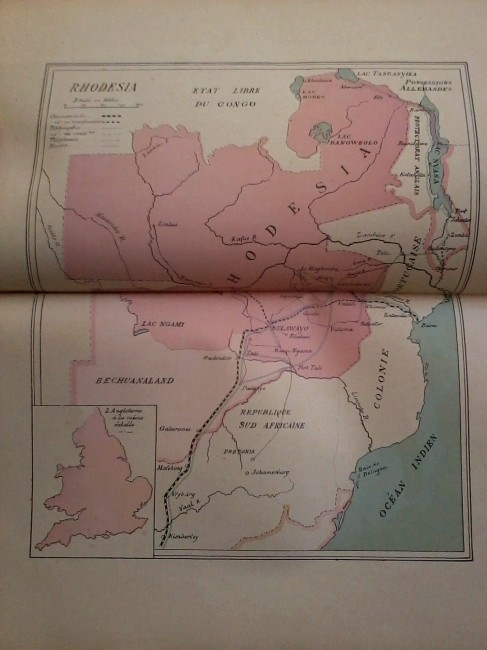 Thesis for PhD with detailed scientific observation and analyses, presented and supported on April 20, 1899, in the hall of public acts of the University of Poitiers, by P. Roque. This is an extremely rare copy of this precious work, hard to find even in National and University Libraries - and the only copy selling on internet! We sold one copy of this title for $420 in April, 2015 at Auction #42 on AntiquarianAuctions.com (https://antiquarianauctions.com/lots/la-compagnie-a-charte-de-lafrique-du-sud-1899-1st-edition-with-map-of-southern-africa)

- The discovery of America and the route to India

- Colonization companies before the 19th Century

- The British and the Boers

- The Rt Hon Cecil John Rhodes DCL , founder and managing director in South Africa (5 July 1853 – 26 March 1902). He was a British businessman, mining magnate, and politician in South Africa. An ardent believer in British colonialism, Rhodes was the founder of the southern African territory of Rhodesia, which was named after him in 1895. South Africa's Rhodes University is also named after Rhodes. He set up the provisions of the Rhodes Scholarship, which is funded by his estate.)

- Reservations made for the benefit of the Crown

- Analogy with the powers of magistrates

- Original forms of Colonization Companies in France and England

- Comparative trends in France and England

- Memorandum of Mr. Chamberlain, State Secretary at the Colonial Office

- Justification of the police forces

- History of the police forces of the Company

- Resistance of Kruger and German intervention

- Capital of the Charter Company

- The line of Congo - Djibouti

The British South Africa Company (BSAC or BSACo) was chartered in 1889 following the amalgamation of Cecil Rhodes' Central Search Association and the London-based Exploring Company Ltd, which had originally competed to capitalize on the expected mineral wealth of Mashonaland but united because of common economic interests and to secure British government backing. The company received a Royal Charter in 1889 modelled on that of the British East India Company. Its first directors included the Duke of Abercorn, Rhodes himself and the South African financier Alfred Beit. Rhodes hoped BSAC would promote colonisation and economic exploitation across much of south-central Africa, as part of the "Scramble for Africa". However, his main focus was south of the Zambezi, in Mashonaland and the coastal areas to its east, from which he believed the Portuguese could be removed by payment or force, and in the Transvaal, which he hoped would return to British control. It has been suggested that Rhodes' ambition was to create a zone of British commercial and political influence from "Cape to Cairo", but this was far beyond the resources of any commercial company to achieve and would not have given investors the financial returns they expected. BSAC was created in the expectation that the gold fields of Mashonaland would provide funds for the development of other areas of Central Africa, including the mineral wealth of Katanga. When the expected wealth of Mashonaland did not materialise and Katanga was acquired by the Congo Free State, the company had little money left after building railways for significant development, particularly in areas north of the Zambezi. BSAC regarded its lands north of the Zambezi as territory to be held as cheaply as possible for future, rather than immediate, exploitation. (https://en.wikipedia.org/wiki/British_South_Africa_Company)

IMPORTANT: Shipping to South Africa possible only via UPS/DHL Express service ($80)! Shipping to Europe & UK via national postal services ($16-25). Shipping to US via FedEx ($30).