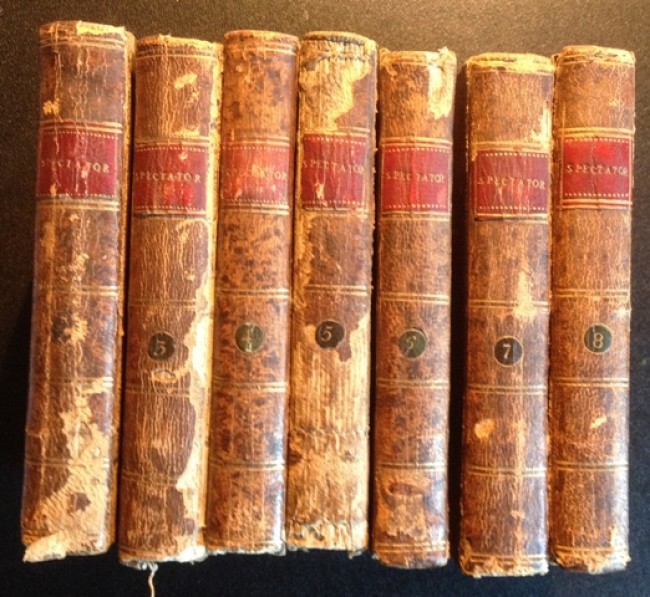 Published: Printed for the Booksellers, , London, 1799

Vol. 2: Preface addressed to The Right Honourable Charles Lord Halifax by the Spectator. Entries dated Saturday, June 2, 1711 (by Addison) to Thursday, September 13 (by Addison). With index.

Vol. 3: Preface addressed to The Right Honourable Henry Boyle, Esq by The Spectator. Entries dated Friday, September 14, 1711 (by Addison) to Tuesday, December 18 (by Addison). With index.

Vol. 4: Preface addressed to the Duke of Marlborough by the Spectator. Entries dated Wednesday, December 14, 1711 (by Steele - From the Letter-box) to Saturday, March 3, 1712 (by Addison). With index.

Vol. 5: Preface addressed to The Right Honourable Thomas Earle of Wharton by the Spectator. Entries dated Monday, March 10, 1712 (by Steele) to Saturday, May 31 (by Addison). With index.

Vol. 6: Preface addressed to The Right Honourable Charles Earle of Sunderland by the Spectator. Entries dated Tuesday, June 3, 1712 (by Mr. E. Budgell) to Tuesday, September 2 (by Steele - From the Letter-box). With index.

Vol. 7: Preface addressed to Mr. Methuen by Richard Steele. Entries dated Wednesday, September 3, 1712 (by Steele - From the Letter-box) to Saturday, December 6. With index.

The Spectator was a daily publication founded by Joseph Addison and Richard Steele in England, lasting from 1711 to 1712. Each "paper", or "number", was approximately 2,500 words long, and the original run consisted of 555 numbers, beginning on 1 March 1711. These were collected into seven volumes. The paper was revived without the involvement of Steele in 1714, appearing thrice weekly for six months, and these papers when collected formed the eighth volume. Eustace Budgell, a cousin of Addison's, also contributed to the publication.

The stated goal of The Spectator was "to enliven morality with wit, and to temper wit with morality...to bring philosophy out of the closets and libraries, schools and colleges, to dwell in clubs and assemblies, at tea-tables and coffeehouses" It recommended that its readers "consider it part of the tea-equipage" and not leave the house without reading it in the morning. One of its functions was to provide readers with educated, topical talking points, and advice in how to carry on conversations and social interactions in a polite manner. In keeping with the values of Enlightenment philosophies of their time, the authors of The Spectator promoted family, marriage, and courtesy. Despite a modest daily circulation of approximately 3,000 copies, The Spectator was widely read; Joseph Addison estimated that each number was read by 60,000 Londoners, about a tenth of the capital's population at the time. These readers came from many stations in society, but the paper catered principally to the interests of England's emerging middle class—merchants and traders large and small.

The Spectator was also popular and widely read in the late 18th and 19th century. It was sold in eight-volume editions, of which this is one.

Condition: Number for Vol. 2 missing from spine. In general, bindings tight but all covers scuffed and worn or fraying at edges. Covers of Vols. 3-7 worn away to underlying board in places; spines of Vols. 2 & 5 also worn away. Pages very slightly foxed. Some evidence of book worm in most volumes, Vol. 5 especially.

Please note this lot will be posted from the UK.