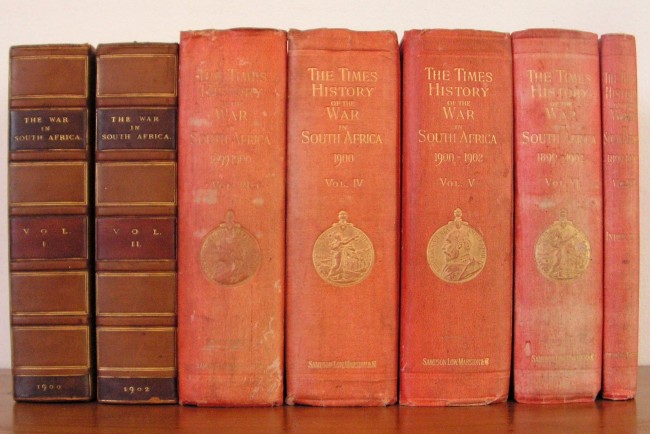 Email or share
Unmatched set of this landmark work on the South African War. Seven demy 8vo volumes: volumes I and II of three-quarter calf with cloth sides and spines tooled in compartments and gilt-lettered, with marbled endpapers. The remaining five volumes in original red cloth; top and bottom edges of boards ruled in blind, and spines with gilt lettering and medallion device in each case. Top edges gilt in all seven volumes; pp. xxiv + 392, xviii + 467, xviii + 597, xviii + 597, xxviii + 614, xv + (i) + 622, (viii) + 209; illustrated with plates, plans, maps and pocket maps, all of which present, with the exception of the General Map of South Africa, missing from the first volume, which has been re-bound, without the front pocket. The condition of the seven volumes is variable, that of the first two, re-bound books being very good, with a little rubbing and occasional fox spot, the spines of the remaining books characteristically sunned and somewhat mottled with traces of fishmothing. The edges of the boards in volumes V to VII show some damp-staining, which is more pronounced to the lower board of Volume VI. Scattered, moderate foxing is noted throughout, and the upper hinge of Volume IV is just holding. Maps generally very good, but with very occasional minor creasing and soiling, and short marginal tears. A good working set. (Mendelssohn I, p. 36, Hackett, pp. 1, 124) An admirably objective account of the Anglo-Boer War and its aftermath, considering the contemporary perspective of the authors. "A comprehensive history of the war in seven volumes published in the years 1900-1909. A complete account of military operations in South Africa from 1899-1902 together with chapters on the political and historical background to the conflict and the work of reconstruction following hostilities. Volume VII (Index and Appendices) contains much useful information including a chronological table of events from 1899-1909, regimental casualties with period of service of each regiment and engagements at which present, official table of casualties with summary and extensive bibliography. An important and well produced work. Possibly the foremost reference pertaining to the second Boer War." - Hackett: South African War Books, p. 1.

Lions Wild and Friendly : Close Ups of the King of Beasts