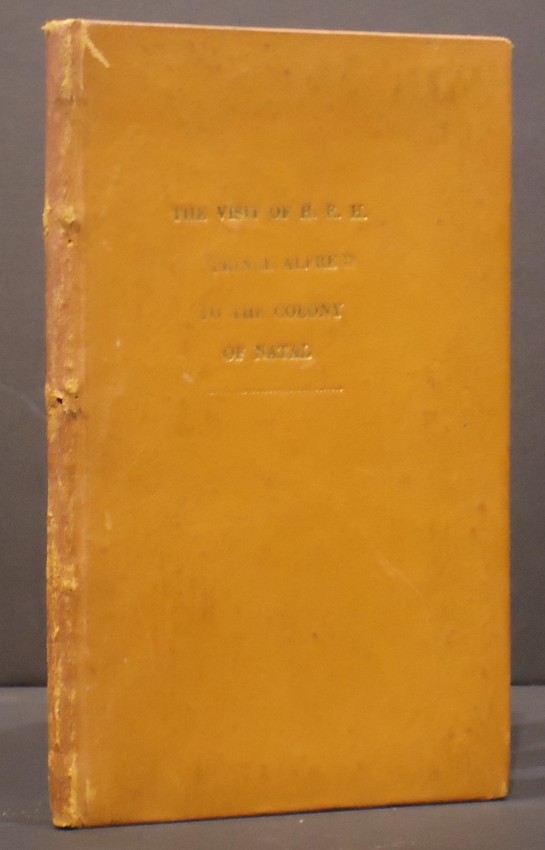 THE VISIT OF HIS ROYAL HIGHNESS PRINCE ALFRED TO THE COLONY OF NATAL.

In 1856, at the age of 12, it was decided that Prince Alfred, in accordance with his own wishes, should enter the Royal Navy. A separate establishment was accordingly assigned to him, with Lieutenant J.C. Cowell, RE, as governor. He passed the examination in August 1858, and was appointed as midshipman in HMS Euryalus at the age of 14. In July 1860, while on this ship,  Prince Alfred paid an official visit to South Africa while serving as a midshipman on board HMS Euryalus. His tour took him through the Cape Colony, Eastern Cape, Natal and the Orange Free State. https://en.wikipedia.org/wiki/Alfred,_Duke_of_Saxe-Coburg_and_Gotha

Mendelssohn (Sidney) South African Bibliography vol 2 page 85: Prince Alfred, better known as the Duke of Edinburgh, who afterwards became the Duke of Saxe-Coburg-Gotha, paid his first visit to South Africa in August 1860. He proceeded to Natal from the Cape Colony on horse- back, travelling several hundred miles in this manner. After arriving at the border, he rode a further 130 miles in three days, when he reached Maritzburg, where he was met by the Bishop of Natal. He laid the foundation-stone of the New Town Hall, and was entertained at a war dance performed by two thousand natives under the chiefs Ngoza and Zatchuke, who presented him with an address which was read by Mr. Shepstone, then Secretary for Native Affairs. Next day the Prince rode to Durban, where he was present at a dance given by the municipality, in which he took part in spite of his ride of fifty-four miles that day. The pamphlet contains a view of Maritzburg and a portrait of the two Kaffir chiefs.

Page 7 of the pamphlet reads: Prince Alfred, accompanied by Sir George Grey, the Governor of the Cape, entered the colony on horseback, from the landward border, on 31st August 1860. His Royal Highness was received on the boundary by Colonel Allen, of the Natal Carbineers, appointed by the colonial government to the duty of attending as aide-de-camp to His Royal Highness.

Robert James Mann, medical practitioner and writer on science who actively strove to promote the development of Natal throughout his professional life, not only through his scientific work, but also by lecturing and writing popular articles. As an active member of the Natal Society (Pietermaritzburg) he arranged its exhibition of 1858, which was of both artistic and scientific interest. He served as president of the society from 1864 to 1866, contributed mineralogical specimens to its museum, and was the leading figure in its museum activities. He was also vice-president of the Natal Horticultural Society from 1864 to 1866, and served on the committee of the Natal Acclimatisation Society from 1865. At the time of the International Exhibition of 1862 he was secretary of the local organising committee and compiled a Catalogue of contributions to the International Exhibition from Natal (Pietermaritzburg, 1862). He wrote various publications in which the colony was described and emigration to it encouraged, for example, The colony of Natal (1860, 229 p.), A description of Natal (1860, 24 p.), Emigration to Natal... (1866, 64 p.), The emigrant's guide to the colony of Natal (1868, 206 p.), and "Statistical notes regarding the Colony of Natal" (Journal of the Statistical Society of London, 1869). http://www.s2a3.org.za/bio/Biograph_final.php?serial=1822