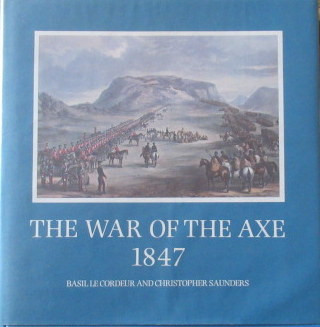 Correspondence between the governor of the Cape Colony, Sir Henry Pottinger, and the commander of the British forces at the Cape, Sir George Berkely and others.

In 1846 a man was caught stealing an axe in Fort Beaufort, a small eastern - frontier town of Britain's Cape Colony. The group escorting the thief was attacked by a party of Xhosa who killed the guard and released the prisoner. This incident sparked off hostilities which became known as The War of the Axe or the Seventh Frontier War. The War of the Axe is an episode in the prolonged history of the struggle between white settlers and black inhabitants on the eastern Cape frontier . Not a war of spectacular battles, it was rather one of skirmishes, of cattle raids and of abortive attempts by British and colonial forces to engage the enemy or to secure the persons of the Xhosa rulers. It was an unequal contest which, like all other nineteenth century frontier wars, was of crucial political, military and social significance.

The war was fought in what is today the Ciskei and Eastern Cape. During the 1847 phase of the war the Buffalo River Mouth was opened up and developed for the landing of military supplies: the community that grew up as a result, was to form the nucleus of the future town of East London.

In 1847 a new governor arrived at the Cape Colony_ Sir Henry Pottinger. He was destined to spend the entire time of his governorship on the frontier, mainly in Grahamstown and Fort Peddie. His correspondence with the commander of the British forces at the Cape, Sir George Berkeley forms the basis of this volume. Other key figures include Colonel Henry Somerset of the Cape Mounted Rifles: Sandile head of the main group of western Xhoso ( Ngqika ): and Phatho of the Gqunukhwebe.

Contemporary illustrations enrich the text and include many unpublished works by the celebrated artists Thomas Baines and Frederick I'Ons.