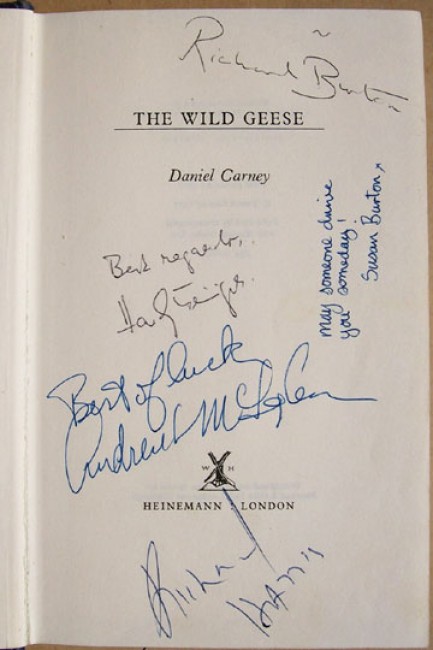 This book contains a collection of important original autographs and inscriptions by those involved in the making of the film "The Wild Geese".

The film based on this book was released in 1978. Marc Griffin worked on location in South Africa and got just about everybody on set to sign this book.

The first image provided is of the title page, with Richard Burton's signature at the top of the page. Running down the right hand side of the page is Susan Burton's (Suzy Hunt) inscription, who was married to Burton at the time of the making of the film. Hardy Kruger signed under the title, and below that the film director Andrew McLaglen and Richard Harris at the bottom of the page.

The opposite page has Roger Moore's inscription to Marc Griffin: "Mark, Thanks for letting me drive you to and fro! All the best - Roger Moore." A photograph of Roger Moore is loosely inserted.

The legendary mercenary commander, Michael "Mad Mike" Hoare was a technical advisor and a number of actual veterans were used to make the film and he wrote on the dedication page: "Good luck young Griffin - you remind me of your brave father - Mike Hoare."

Winston Ntshona's signature follows "To Marc from LIMBANI" (President Limbani is the character played by Ntshona) at the top right hand side of the front free end paper.

Kenneth Griffith played the role of a homosexual in the film and his amusing inscription is on the front paste down.

Only the most prominent and easily identifiable signatures have been mentioned.

CONDITION DETAILS: The dust jacket has some wear and soiling and a large closed tear at the bottom of the upper side. The spine is cocked. Many people handled this book, so there is also a bit of soiling internally 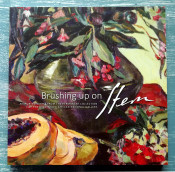 Brushing up on Stern - Featuring work from the Permanent Collection of the Iziko South African&hellip;

PLANTS OF THE CAPE FLORA

Lions Wild and Friendly : Close Ups of the King of Beasts