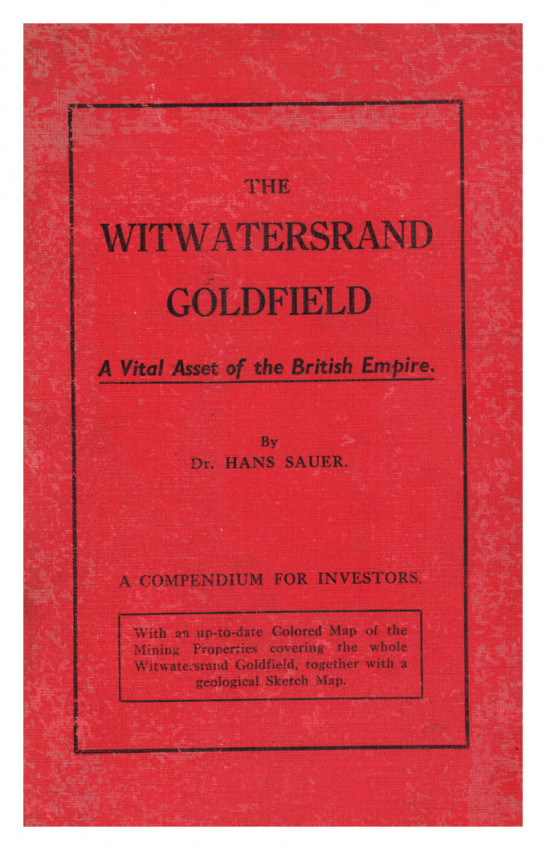 A vital asset of the British Empire

A compendium for investors

First edition: 30 pages, 2 folding maps in the pocket at the back of the book, red cloth boards which are insect scarred, a good copy.

From the title page: This brochure is published as a guide to investors and to those who are responsible for the care of British interests.

Hans Sauer (11 June 1857 - 28 August 1939) was a South African born medical doctor, lawyer, adventurer and businessman. He is regarded as a Rand Pioneer, arriving in Johannesburg in 1886 shortly after the discovery of gold and was the town's first district surgeon. He is linked with the creation of Rhodesia.

In 1886, he was employed by Cecil John Rhodes and Charles Rudd with a 15% share, and he headed to Johannesburg to join the Witwatersrand Gold Rush where Sauer bought up mining claims along the Main Reef on behalf of the men. In a growing mining town, he soon had many interests but his main appointment was on 6 March 1887 as Johannesburg's first district surgeon. Other positions held included chairman of the Diggers Committee, chairman of the Rand Club and a chief consulting surgeon at the new Johannesburg Hospital as well as investing in coal mining in the East Rand to supply fuel to the gold mines. https://en.wikipedia.org/wiki/Hans_Sauer

Identity Department of the Transvaal

The Silkworm Book; or, Silkworms, Ancient and Modern, Their Food, and Mode of Management

A BOTANIST IN SOUTHERN AFRICA