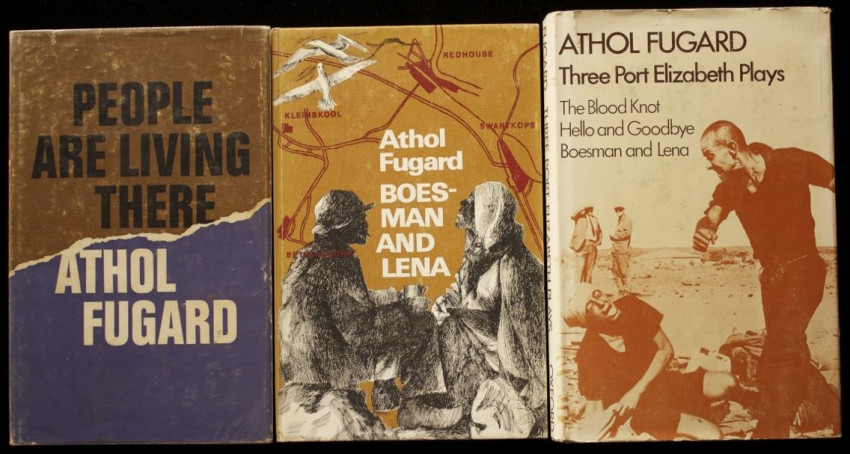 Athol Fugard is a world-renowned SA playwright. His novel Tsotsi was filmed in 2005 and won the Academy Award for Best Foreign Language Film.

Filmed in 1999, this play starred Danny Glover and Angela Bassett in the leading roles. 'Although acclaimed and much loved at home and abroad, as late as 1984 Boesman and Lena was targeted by the Cape's Department of Education with the edict to schools that "all copies of the book issued are to be taken in and destroyed forthwith". A public outcry followed the order, which was lated rescinded. The question arose as how to best destroy the copies of the play. A spokesperson from the Department of Education of the time is reported to have said that burning the books would be the most efficient way.' - Saturday Star, June 12, 1999.

2.) PEOPLE ARE LIVING THERE

Period inscribed on the front end paper, "To Johan, with sincerest gratitude for your warm encouragement (both personally and in your official capacity with PACT) Athol Fugard. Breytenbach 11/4/70."

Note: PACT was the Performing Arts Council of the Transvaal, and 'Breytenbach' refers to the Breytenbach theatre in Pretoria.

Hardcover with dust jacket. Binding tight, contents clean. Jacket with light age-associated edge wear and a short tear at the top of the front panel.