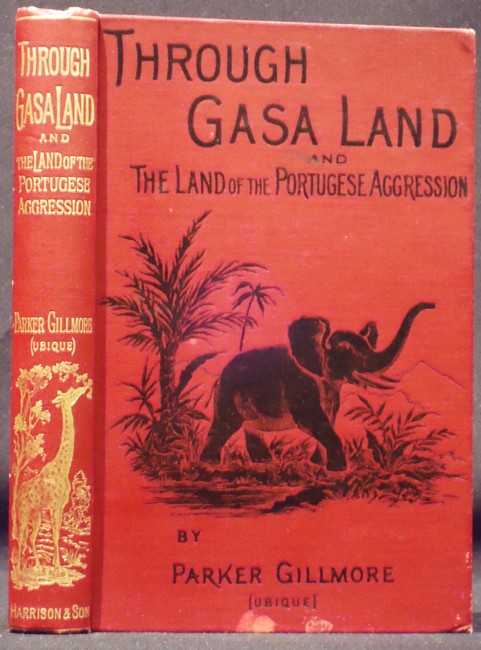 THROUGH GASA LAND AND THE SCENE OF PORTUGUESE AGGRESSION

The Journey of a Hunter in Search of Gold and Ivory

Published: Harrison and Sons, London, No date (circa 1890)

Mendelssohn (Sydney) South African Bibliography, volume 1, page 604‘The claims of Portugal to Gazaland are stated to be "preposterous," and the assumption that she is the owner of Mashonaland is stigmatised as "ridiculous," in the face of her paying "a large subsidy "to" the suzerain of Mashona Land - the Matabele king." It is asserted that the Portuguese and the Boers are both desirous of perpetuating "the accursed institution of slavery . . . hence their sympathy with each other . . . but for the counsel and advice of the authorities at Pretoria, we should never have had the insolent pretensions of the Court of Lisbon made in reference to the Mashona and Mocololo countries." The volume narrates a hunting expedition made by Messrs. Gillmore, Selwyn, and Dillon in that part of the country, now possessed by the Chartered Company, which borders on the Portuguese territories on the east coast extending from Delagoa Bay to the mouth of the Zambesi. The route was taken in a northward direction from Lourenco Marquez, which the author describes as being the "vilest, filthiest, and most deadly place to white man I know of, in all this habitable world." A permanent camp was fixed on the banks of the Sabi River, but excursions were made through the countries of the Mantatees and Mashonas, and eventually the journey was brought to an end at Sofala. The hunters enjoyed splendid big-game shooting of every description, and succeeded in collecting a large quantity of ivory, which was increased by their purchases from the natives, who also sold them some gold. Un- fortunately, Mr. Selwyn succumbed to an attack of fever, but the other two partners travelled from Sofala to Mauritius in company, from whence Mr. Dillon went on board a ship bound for Bombay, but the vessel must have foundered, as it was never heard of again. The author arrived safely in England, after "the most successful shooting trip - in a pecuniary sense" that he "ever made to Austral Africa."’

Czech (Dr. Kenneth P.) An Annotated Bibliography of African Big Game Hunting Books 1785-1999 (Second enlarged edition, Trophy Room Press, 2011), page 107, ‘Gillmore entered Gasa Land, the coastal area of present day Mozambique, to emulate “the great exploits of Gordon Cumming, Andersson, Sir Cornwallis Harris, and other mighty Nimrods” in pursuit of elephant big game. His hunting party encountered buffalo near the Limpopo River, then elephant which left his shoulder “so fearfully contused” from his rifles recoil that he had to take a recess from his hunting adventures. Eventually setting up base camp on the Sabi River, the sportsmen enjoyed considerable hunting for elephant, hippopotamus, rhinoceros, buffalo, lion, giraffe and the like while collecting ivory and trading with native Mashonas, Matabele and Manatees. Unfortunately, there are no illustrations to complement the exciting text.’