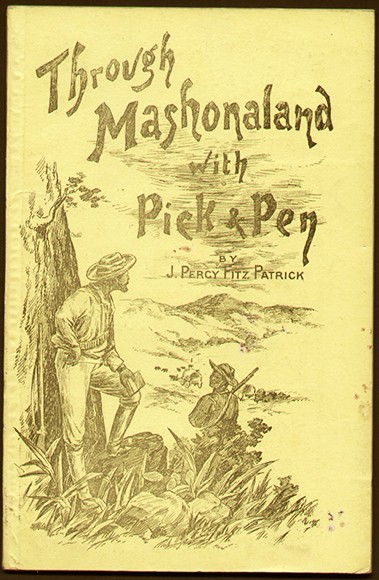 THROUGH MASHONALAND WITH PICK & PEN

The first book to be published on the Rand. It was printed by the Argus and Fitzpatrick could not pay the printing bill; consequently copies of the book remained in the Argus warehouse where many were destroyed. See Godfrey (D ) Enchanted Door, page 89.

Dictionary of South African Biography volume 1, page 292, 'Fitzpatrick was invited by Alfred Beit to organise a tour to be made by Lord Randolph Churchill through Bechuanaland and Mashonaland. His letters about this journey, first printed in the Cape Argus and Johannesburg Star, were collected in 1892 in his first book, 'Through Mashonaland with Pick & Pen.'

In his own preface Fitzpatrick writes of this controversial expedition, 'A good deal of space is devoted to Lord Randolph and his expedition, much more perhaps than the subject is fairly entitled to; but I have allowed it to pass, because he has worked up an elaborate fabric from his views, opinions and experiences and his version of the facts, and the carefully finished side having been prominently - over prominently - exposed to view, it is time the seamy side had a turn. Without disputing a man's good faith, it is quite clear that there may be two sides to a question, in fact there generally are, - and there are quite a number of men who could have changed the aspect of some of Lord Randolph's "incidents" to a most surprising extent, but habit, accident or circumstances has prompted them to "let it slide." That is why I have in many cases presented a view of things which is not Lord Randolph's'.