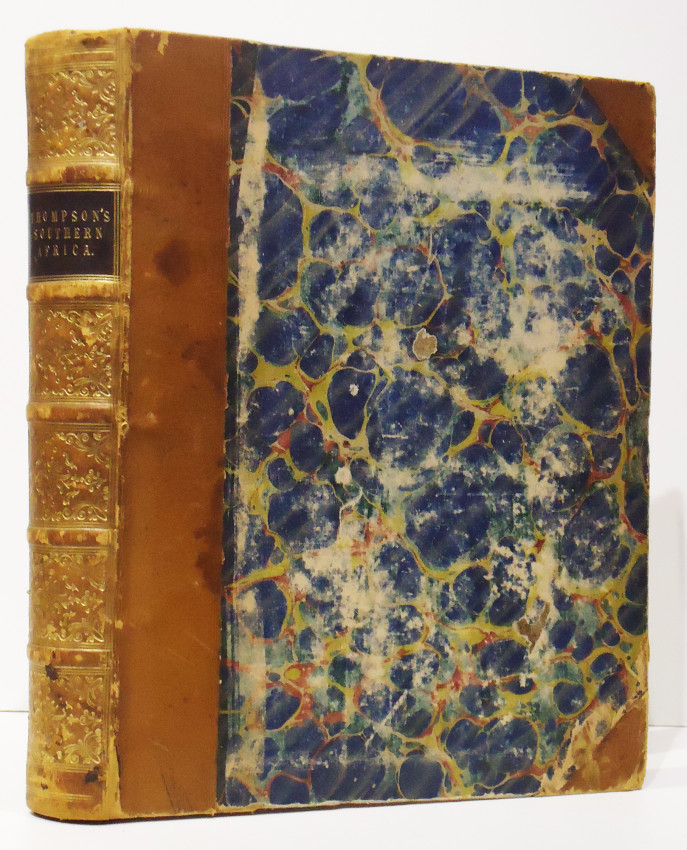 TRAVELS AND ADVENTURES IN SOUTHERN AFRICA

Eight years a resident at the Cape,

Comprising a view of the Present State of the Cape Colony,

With observations on the progress and prospects of the British emigrants

First edition: xviii, 493 pages, aquatint frontispiece - a view of Cape Town, folding map, 2 folding plans of Graaff Reinet and Cape Town, double page aquatint view of Table Mountain from the Parade, 18 aquatint plates, 17 engraved vignettes, light foxing throughout, several plates are foxed, the others are foxed only at the edges, worn at the front hinge, half brown calf with marbled boards, titled gilt on the spine with gilt decoration, good copy.

Mendelssohn (Sidney) South African Bibliography ,volume 2, pages 493/4, 'This valuable work was written by a Cape Town merchant who resided in South Africa for many years, and who travelled throughout the greater part of the Cape Colony and a considerable part of Bechuanaland “partly for the motive of business and partly for the impulse of curiosity.” In 1823 and 1824 he proceeded to the Orange River and Bechuanaland and his account of these regions is recognised as the most important description of this part of the continent published in the early part of the nineteenth century. The third division of the work comprises a review of the condition “of the Dutch and British inhabitants, of the agricultural, commercial, and financial circumstances of the country and of its adaptation for further colonisation”.’

Jock of the Bushveld