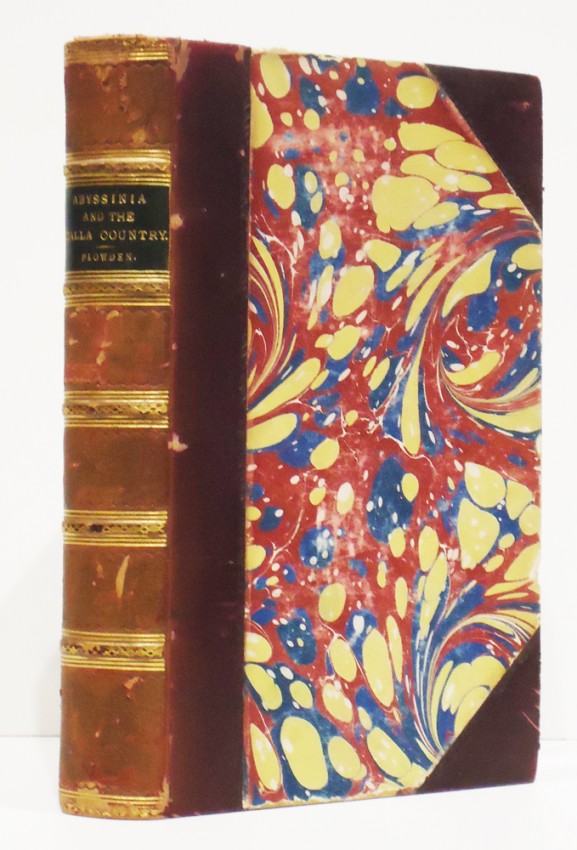 TRAVELS IN ABYSSINIA AND THE GALLA COUNTRY

With an account of a mission To Ras Ali in 1848

485 pages, 2 folding map of Abyssinia, one as the frontispiece, half calf with marbled boards, black title label gilt on the spine with gilt decoration, marbled edges, a very good copy.

Walter Chichele Plowden (1820–1860), consul in Abyssinia, youngest son of Trevor Chichele Plowden of the Bengal civil service, was born on 3 Aug. 1820, and educated at Dr. Evan's school, Hampstead. At the age of nineteen he entered the office of Messrs. Carr, Tagore, & Co., in Calcutta; but sedentary life was so uncongenial to him that he resigned in 1843, and embarked for England. At Suez he met Mr. J. T. Bell, and joined him in an expedition into Abyssinia to discover the sources of the White Nile. He remained in that country till 1847, and was shipwrecked in the Red Sea, on his way to England. In 1848 he was appointed consul in Abyssinia, with a mission to Ras Ali.

He remained in the interior till February 1860, when he took leave of King Theodore. Near Gondar, on the Kaka river, he was attacked by a rebel chieftain, and was wounded and taken prisoner. He was ransomed by the authorities of Gondar on 4 March, and carried into the town, where he died of his injuries on 13 March 1860.

His manuscripts were forwarded to his brother, Trevor Chichele Plowden, by whom they were published as Travels in Abyssinia and the Galla Country, 8vo, London, 1868. https://en.wikisource.org/wiki/Plowden,_Walter_Chichele_(DNB00)