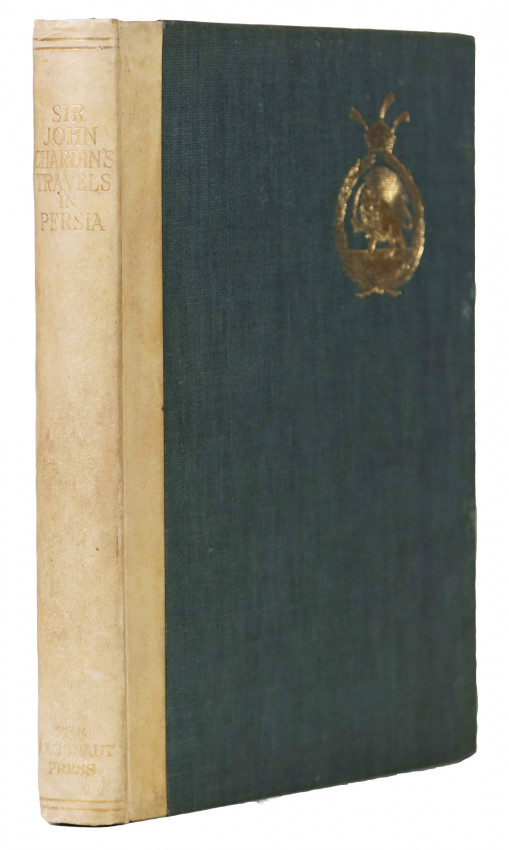 With an introduction by Sir Percy Sykes

The colophon reads: This edition is the third publication of the Argonaut Press and is limited to 975 copies of Japon vellum, numbered 1 to 975. The design appearing on the title page is from an old Persain tile. The volume has been printed by Walter Lewis at the University press Cambridge in the year 1927. This copy is number 266.

Jean Chardin, also called (from 1681) Sir John Chardin, (born November 16, 1643, Paris, France—died December 25, 1713, London, England), French traveller to the Middle East and India. A jeweller’s son with an excellent education, Chardin traveled with a Lyon merchant to Persia and India in 1665. At Eṣfahān, Persia, he enjoyed the patronage of the shah, ʿAbbās II. On returning to France (1670), he published an account of the coronation of Soleymān.

In August 1671 he again set out for Persia. Traveling through Turkey, Crimea, and the Caucasus, he reached Eṣfahān nearly two years later. He remained in Persia for four years, revisited India, and returned to France (1677) via the Cape of Good Hope. Fleeing French persecution of the Huguenots (1681), he settled in London, where he became court jeweller and was knighted by King Charles II. In 1683 he represented the East India Company in Holland.
https://www.britannica.com/biography/Jean-Chardin