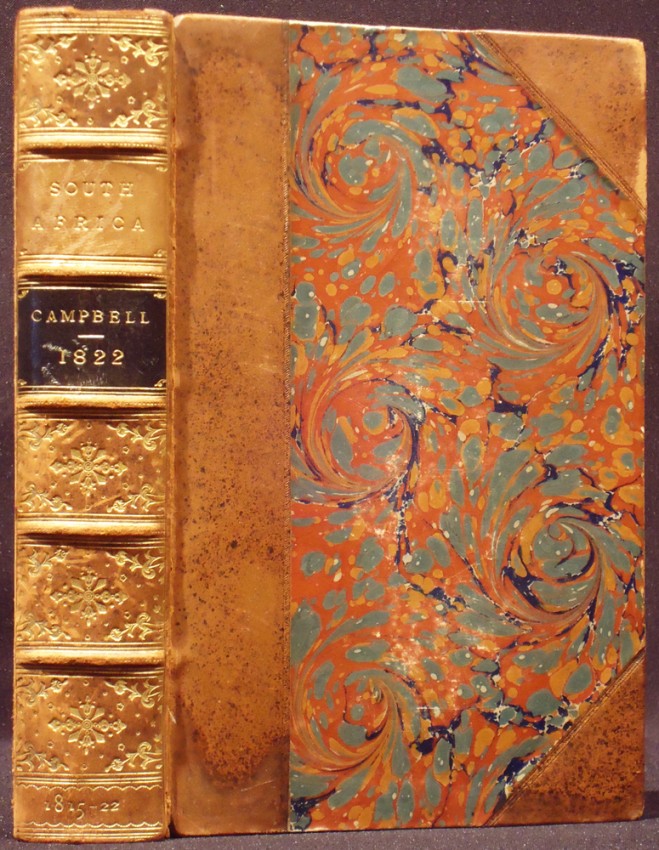 Undertaken at the request of the London Missionary Society; being a narrative of a second journey in the interior of that country

Published: Printed for the Society, London, 1822

2 volumes bound in 1: Volume 1. vii (including the advertisement leaf), xii + 322. Volume 2. 384 pages, folding map coloured in outline as frontispiece (laid down on linen), 11 hand coloured aquatint plates, bound in half sprinkled calf (lightly rubbed along the edges and at the corners) with a black title label on the spine which is decorated gilt in panels, marbled paper sides, edges and endpapers, plates and contents bright, complete with the half title pages, book plate on the second front free endpaper, a very good copy.

‘Upon the death of Dr J.T. van der Kemp the London Mission Society sent Campbell to South Africa to visit and report on their mission stations. Campbell was the first missionary traveller to undertake a long journey into the interior, visiting far-flung missions. From Bethalsdorp he went to Graaff Reinet where he met the traveller W.J. Burchell. Finally after crossing the Orange River he reached Klaarwater mission station and advanced to Lattakoo and beyond, north-west of Malapeetze. When he was returning from this first journey of 4,800 kilometres, Campbell followed the South Bank of the Orange River for 960 kilometres, 480 kilometres on foot, in a region little known to Europeans. Having reached Pella he turned south via Silwerfontein where Cornelius Kok lived and where he received valuable information about Namaqualand, Damaraland and the Bushmen. He also brought back natural history and geological specimens for the L.M.S, museum. In November 1818 Campbell, accompanied Dr John Philip aboard the Westmoreland, made his second voyage to Cape Town. He, Philip and Robert Moffat visited the eastern part of the Colony until halted by the Fifth Frontier War (1818-19). He then set out on his second journey into and beyond the known interior, proceeding further north than in 1812 via the Orange River to Griqua Town and Lattakoo. He returned to Cape Town where he remained for several months before returning to England in November 1820.’ Dictionary of South African Biography, volume 3, pages 127-8.