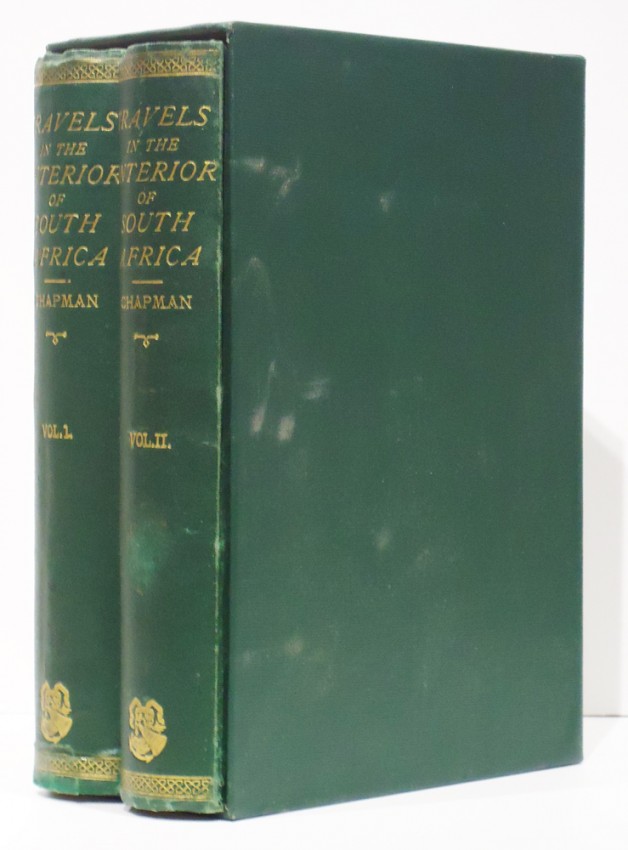 Comprising Fifteen Years' Hunting and Trading; with journeys across the continent from Natal to Walvisch Bay, and visits to Lake Ngami and the Victoria Falls. Illustrated with maps and numerous engravings in two volumes.

454 + 480 pages, wood engraved frontispiece in each volume, 2 folding maps partly coloured and Chapman's journeys traced in red, 8 plates and 19 illustrations in the text, several pages in volume II still unopened, uncut fore-edge, green cloth over bevelled boards with gilt vignette of a lion on the upper covers, titled gilt on the spines, new endpapers preserving the original binder's ticket on the rear pastedown endpaper of volume I, (a very good set complete with the half-title pages, housed in a matching green cloth slipcase.

Mendelssohn (Sidney) South African Bibliography vol. 1 page 321 -322: Starting from Natal, Mr Chapman traversed the eastern portion of the Orange Free State by three distinct routes, and pursuing his travels through the Western Transvaal and Bechuanaland, penetrated up to the almost unknown regions of Matableland. He also visited Walvisch Bay and Lake Ngami, and journeyed through the country of the Namaquas and Damaras.' Few South African books give better descriptions of the sport of the country and the habits and customs of the native races inhabiting the vast areas traversed, and throughout the volumes there are copious notes on the flora and fauna of the countries visited, amplified by the contents of a valuable index enriched with extracts from the works of able writers.

Kennedy(R.F.) Africana Repository, page 40, 'Baines then joined Chapman's expedition through South West Africa to the Victoria Falls….This expedition up to August 1862 he described in Explorations in South-West Africa (London 1864)….Chapman was very angry with Baines because he published first and had acquired fame by exhibiting his pictures of the Victoria Falls. In a preface to Chapman's book acknowledgement is made to Charles Bell 'for drawings and sketches used in illustrating these volumes'. Some of the illustrations are undoubtedly after Bell, who was not a member of the expedition; some of the pictures are by Baines, but without acknowledgement. It was a pity they quarrelled because they had been friends from their first meeting in Potchefstroom in 1850.’

WITH THE CAPE MOUNTED RIFLES

The Partition of Africa