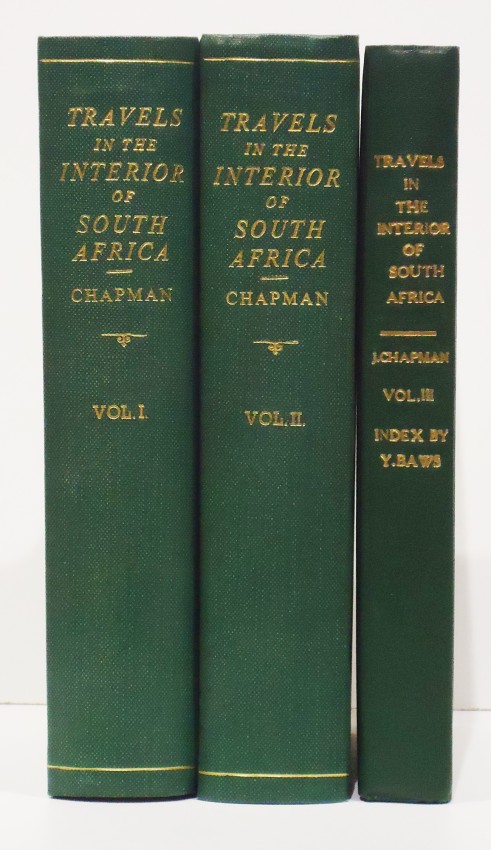 With journeys across the continent from Natal to Walvisch Bay, and visits to Lake Ngami and the Victoria Falls

Illustrated with maps and numerous engravings

First edition: 3 volumes: 454 + 480 + 155 pages, wood engraved frontispiece in each volume, 2 folding maps partly coloured and Chapman's journeys traced in red, the map is volume 1 is a facsimile reprint, 8 plates - the plate in volume 1 opposite page 163 is a facsimile, and 19 illustrations in the text, light foxing throughout, rebound in green cloth with reinforced hinges, titled gilt on the spines, a good set sold with the faults.

Together with this set is a 3rd volume Index to the Travels in the interior of South Africa compiled by Y. Baws. JPL 1964.

Unusual with the index.

Mendelssohn (Sidney) South African Bibliography volume 1 pages 321-2. 'Starting from Natal, Mr Chapman traversed the eastern portion of the Orange Free State by three distinct routes, and pursuing his travels through the Western Transvaal and Bechuanaland, penetrated up to the almost unknown regions of Matableland. He also visited Walvisch Bay and Lake Ngami, and journeyed through the country of the Namaquas and Damaras.' Kennedy, Africana Repository, page 40, 'Baines….then joined Chapman's expedition through South West Africa to the Victoria Falls... This expedition up to August 1862 he described in Explorations in South-West Africa (London 1864)... Chapman was very angry with Baines because he published first and had acquired fame by exhibiting his pictures of the Victoria Falls. In a preface to Chapman's book acknowledgement is made to Charles Bell 'for drawings and sketches used in illustrating these volumes'. Some of the illustrations are undoubtedly after Bell, who was not a member of the expedition; some of the pictures are by Baines, but without acknowledgement. It was a pity they quarrelled because they had been friends from their first meeting in Potchefstroom in 1850'.