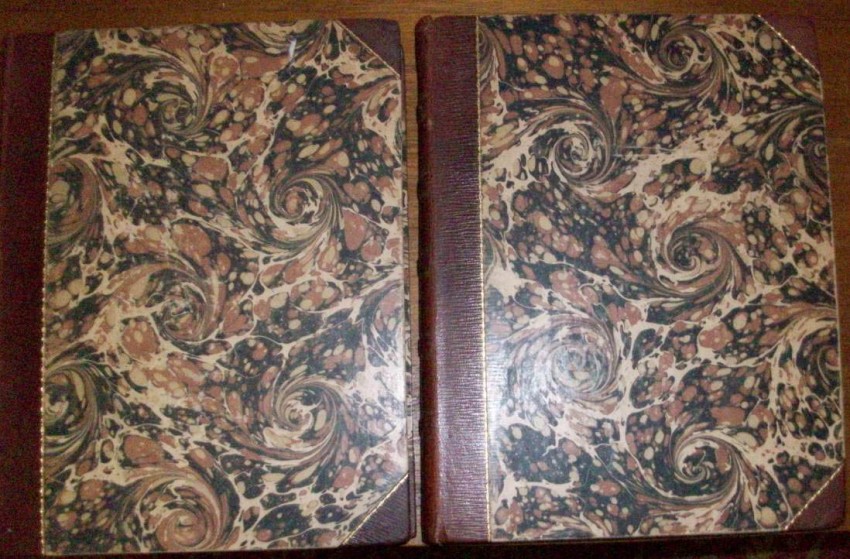 Travels in the Interior of Southern Africa- 2 Volume SET. Plus Hints on emigration to the Cape of Good Hope

First edition. The account of Burchell's expedition into the interior of Southern Africa, on which he trekked across the Karroo, through Roggeveldt to the Orange River and thence traversed the Bosjeman districts spending a total of 4 years exploring the region with only a handful of hottentots for companions. In the preface he states that his collections comprised 63,000 natural history specimens, 500 drawings and a mass of astronomical, meteorological and other observations and notes. Of the natural history specimens, the majority were donated to the Natural History Museum on his return.

The plates which illustrate the work, many of them folding panoramic views which extend up to two feet in width, are of particular interest, many being examples of them then practically unknown process of scenographic projection, by which the impression was produced by means of a revolving cylinder. In addition all the plates were coloured by Burchell himself. The work deals with his explorations specifically between 1811-1812, a third volume having been projected but never published. Burchell also travelled extensively in South America but never published an account of his explorations there. Nevertheless, his collections from that continent were said to be at least eight or nine times larger than his African collection.

Of the above work only 750 copies of Volume I and 500 of Volume II were ever published and it has now become one of the rarest of all Southern African exploration narratives. Also included in this copy is a 4-page article by Burchell entitled Hints on emeigration to the Cape of Good Hope, a reply to a criticism in the Qaurterly Review of an earlier pamphlet published under the same title.

TRAVELS IN THE INTERIOR OF SOUTHERN AFRICA