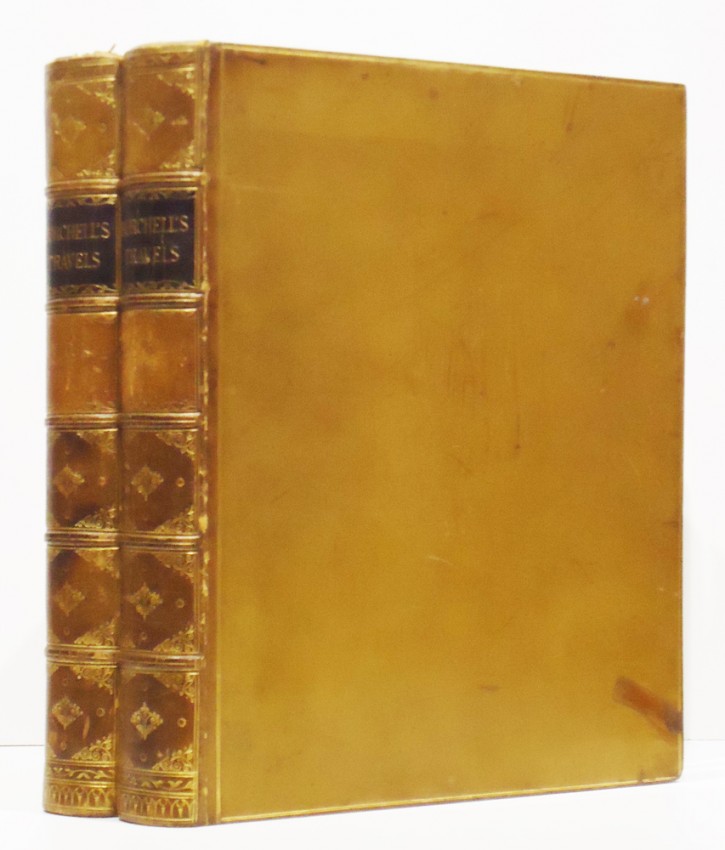 TRAVELS IN THE INTERIOR OF SOUTHERN AFRICA (An unusually good copy).

2 volumes, I. viii + [iv contents] + 582, II. [vi] + 648 pages, errata leaf, half-title page in each volume, hand-coloured aquatint frontispiece in each volume, 20 hand-coloured aquatint plates - 5 of which are fine folding panoramas, 96 wood engravings each with tissue guards, large folding map (850 x 720 mm) with the author's route is indicated in red, contemporary full calf, the spines are gilt decorated in panels and titled on black leather labels, bookplate on the front paste-down endpapers and a second bookplate of Alpheus Fuller Williams on the front free endpapers. With Hints on Emigration to the Cape of Good Hope after the map in volume I, contents crisp, a very good set.

Ian D. Colvin, in his famous introduction to Sidney Mendelssohn’s South African Bibliography, writes, 'Of Burchell I might say without much exaggeration that he is in many respects the greatest name in our bibliography. He is not, certainly, one of our greatest travellers, if we judge travel by extent of the new country explored; his greatness lies rather in the quality of his observation. His drawings express the manner of the man he was; in their loving accuracy we see a reflection of a mind devoted to truth for its own sake, not a hard scientific truth as in barrow, but truth seen with human eyes, in all its colour and beauty. He had a kind of genius for observation, whether in broad outline, as where he describes Cape Town, or in the detail as in his account of a Hottentot’s eyes or an antelope’s horns. Thus, for example, in describing the feathers of the Wilde Paauw, he says: "The irides were of a beautiful, pellucid, changeable, silvery, ferrugineous colour." Or take this sentence in his description of a vulture: "There was a heaviness in their gait and looks, which made one feel half-inclined to consider them rather as beasts of prey, than as feathered inhabitants of the air."...To my mind Burchell is the equal of the best in this style of writing; not even Ruskin could have improved on many of his passages.'

This copy contains Hints on Emigration to the Cape of Good Hope. See Abbey (J.R.) Travel in Aquatint and Lithography 1770-1860, number 327 (pages 281/2), for a discussion on possible variant editions. Abbey’s copy which was in the original boards contained neither Hints nor the half-title pages which might indicate that it was an early issue. Abbey also mentions that 750 copies of volume I and 500 copies of volume II were printed.

See also Alfred Gordon-Brown’s introduction to the facsimile reprint published by Struik in 1967.

KRAAL AND CASTLE - Khoikhoi and the Founding of White South Africa