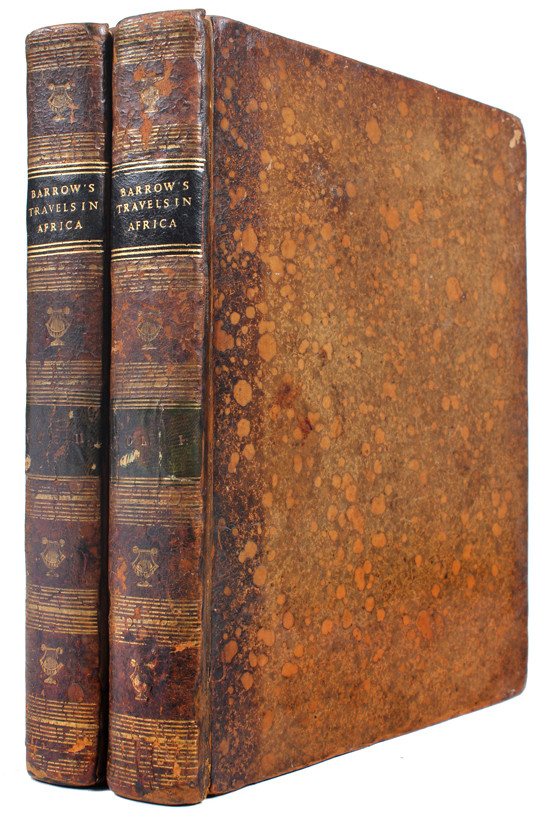 In which are described the character and the condition of the Dutch Colonists of the Cape of Good Hope, and of the several tribes of natives beyond its limits:

The natural history of such subjects as occurred in the animal, mineral, and vegetable kingdoms; and the geography of the southern extremity of Africa.

Comprehending also a topographical and statistical sketch of the Cape Colony: with an inquiry into its importance as a naval and military station; as a commercial emporium; and as a territorial possession.

The second edition with additions and alterations illustrated with several engravings and charts.

Second (and best) Edition: 2 volumes, xvi, 427 + 372 pages, 8 hand-coloured aquatint plates by Samuel Daniell, large folding map coloured in outline and lined with cloth, 8 folding charts and plans 2 of which are hand-coloured -the usual off-setting on the two hand-coloured charts in volume II, full mottled calf binding with black title labels gilt and gilt decoration on the spines, the volumes have been rebacked, a very good set.

Mendelssohn (Sidney) South African Bibliography volume 1, pages 87 - 88. Barrow was attached to the staff of the Earl of Macartney, one of the governors of the Cape Colony during the first occupation by the British. Barrow accompanied an expedition from Cape Town to Graaff-Reinet, and another to Namaqualand, and he gives an excellent description of the country traversed, particularly with regard to the botany and zoology of these regions. He provides significant evidence of the alleged brutality of the Boers to their slaves and Hottentot servants, and there is a description of the characteristics, habits, and customs of the various native races. The second volume deals with the importance of the country from a military and naval perspective. The plates by Daniell are not present in the first edition.