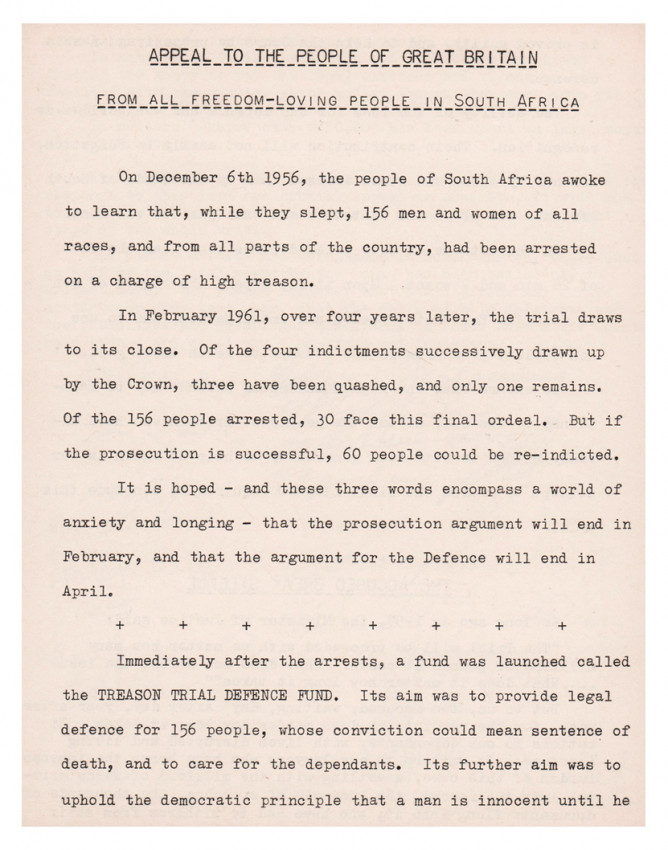 TREASON TRIAL APPEAL LETTER (Signed by many of the trialists)

3 page typed letter on A5 paper appealing for funds

About the Appeal Letter
In 1956, Canon John Collins started a Treason Trial fund for the defence of 156 leaders accused on four counts of treason. By 1961, three of the indictments had been quashed. If prosecution of the fourth indictment succeeded however, it would open 60 more to re-indictment. This au- thenticated letter is one of the most historically unique documents in South African history. It is an appeal drafted mere months before the end of the Treason Trial asking for support for the last leg of what had been a difficult four year trial. 24 leaders in the struggle against apartheid signed their names to it. The funds raised paid for legal expenses and supported detainees and their families

The Ruling
On all the evidence presented to this court and on our finding of fact, it is impossible to come to the conclusion that the African National Congress had acquired or adopted a policy to overthrow the state by violence, that is, in the sense that the masses had to be prepared or conditioned to commit direct aspects of violence against the state 29 March 1961 Mr Justice Rumpff

Historical impact
“The trial has been an inestimable blessing because it forged together diverse men and women of goodwill of all races who rallied to the support of the Treason Trial Fund and to keeping up the morale of the accused...In all humility I can say that if there is one thing which helped push our movement along non-racial lines, away from narrow, separative racialism, it is the treason trial, which showed the depth of the sincerity and devotion to a noble cause on the white side of the colour line, ranging from those already mentioned to the brilliant team of legal men who defended us so magnificently for so little financial reward. To all these gallant helpers, I should like to say on behalf of all the accused that our future course of conduct will justify your help, for in all things we shall be motivated by the noble urge of human unity rather than division and separativeness.”

“When the racist regime arrested and charged with high treason 156 leaders of our democratic movement in 1956, it hoped that it would destroy that movement and create a situation in which it would expand and entrench the apartheid system without opposition. John Collins took the side of those on trial... He came to our aid not in pity but in solidarity. His actions carried the message that in the struggle between the forces of democracy and those of racism, there can be no neutrality Canon Collins memorial lecture by Oliver Tambo 28 May 1987 in London

Funds from the sale of this letter will support the continued work of the Canon Collins Educational and Legal Assistance Trust in Southern Africa.

Named in honour of Canon John Collins, co-founder of the Anti-Apartheid Movement, the Canon Collins Educational Trust for Southern Africa (CCETSA) was founded in 1981, initially to provide educational support for exiled anti-apartheid activists to study in the UK. After Namibia’s independence in 1990 and the emergence of democracy in South Africa in 1994, the Trust widened its scope to include countries across the southern African region, offering scholars opportunities to study at a South African university of their choice. Scholarships, mainly postgrad, are awarded to scholars from Namibia, Malawi, Lesotho, Swaziland, Zambia, Mozambique, South Africa, Botswana and Zimbabwe, with all awardees deeply committed to social change. As part of their application process to become Canon Collins Scholars, applicants must demonstrate their commitment to social justice and that they share the values of agency, learning, collaboration, solidarity and fairness. Among the Trust’s 3 500 alumni are hundreds of teachers, lawyers, public health specialists, conservationists, engineers, political and business leaders and development workers, who are leading change in their communities.

For further information on the Canon Collins Trust see their latest annual review: