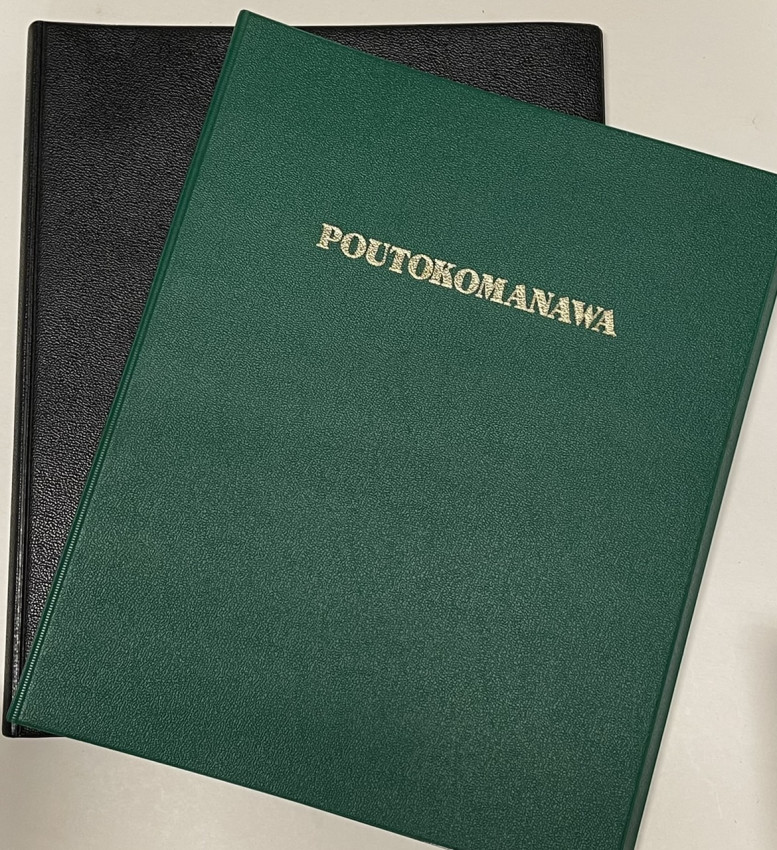 A pair of research binders each containing a report on a specific tribal art object, the historically important Maori post figure Poutokomanawa and a "Baga Female Figure",  both illustrated with photographs, the latter with 12 transparencies ("our only transparencies-- please keep them like a treasure").  The Poutokomanawa report has a printed green binder and includes photocopied authentication material by Terence Barrow, dated 1981, and a statement by William Flagg, 1979.  No publisher mentioned, possibly done by an antiquities dealer for targeted customers.  Uncommon and by its nature limited.

The Poutokomanawa material seems to have cultural significance in that Sotheby's auctioning of the Maori post figure, with its elaborate catalog description and emphasis on Barrow's credentials,  initiated a discussion of ethical issues inherent in marketing "Tribal Art," as represented by an excerpt from Haidy Giesmar,  WHAT'S IN A PRICE? An Ethnography of Tribal Art at Auction:

-The catalogue uses this language to begin the ultimate seduction of

the buyer via the interaction of image and text. In the Sotheby’s auction
of November 1998 the showcase of the catalogue and sale was Lot 162:
‘A Magnificent Maori Figure, poutokomanawa, carved as a male
figure, with rectangular pegs beneath the broad feet with distinct toes
(some missing) . . .’ and so on for three pages of provenance with an
article by Terence Barrow PhD, three full-page colour photographs (two
from different angles and one close-up). The figure was the cover piece
for the entire catalogue, and during the viewing and sale came to be
affectionately termed as the ‘Maori Man’ (Figure 1). Each photograph in
the spread is taken portrait style, highlighting the human characteristics
of the figure in a manner reminiscent of fashion magazine. This photographic

personification was vital to the creation of a strong and memorable identity for the piece,

transcending reputable anthropological
knowledge and resulting in an unprecedented high price. The piece was
catalogued ‘estimate upon request’ generating a secretive atmosphere;
the estimate provided was $1,000,000, and it sold for this exactly
($1,102,500 including the buyer’s premium). Despite this being the
highest price ever achieved by a Pacific art object at auction, the lot went
to an uncontested, absentee bidder.

Guide to The Birds of Madagasgar

THE BIRDS OF NATAL AND ZULULAND