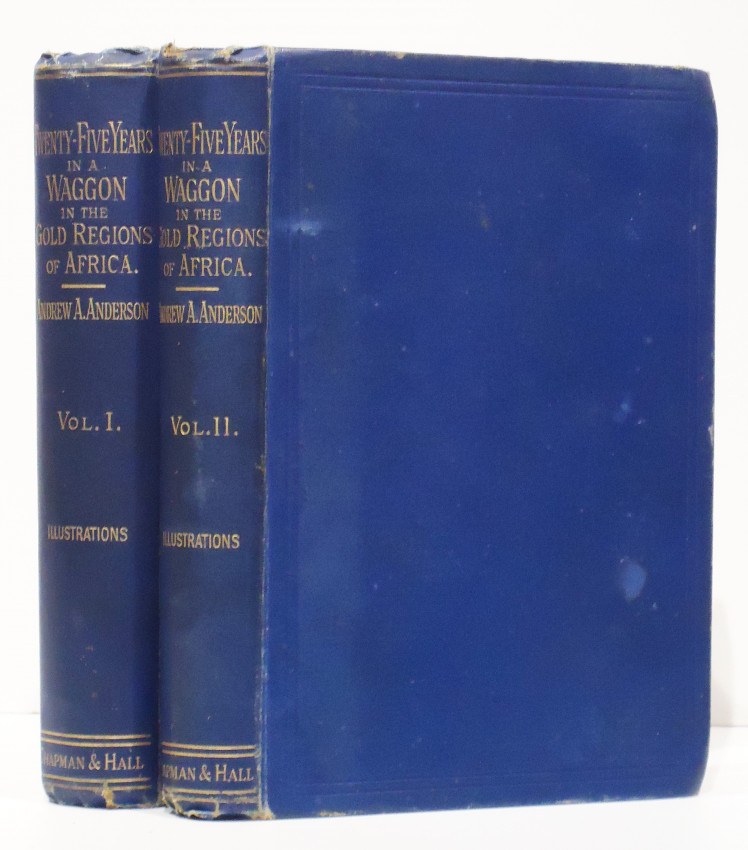 TWENTY-FIVE YEARS IN A WAGGON

In the Gold Regions of Africa,

With illustrations by the author

First Edition: 2 volumes, 307 + 253 pages, frontispiece in each volume, volume 1 – The night's bag in the Kalahari, volume 2 - Ancient carvings on rocks, 12 plates, original blue cloth, titled gilt on the spines which are starting to wear at the top and bottom, light foxing, corners bumped, uncut edges, a good set.

Mendelssohn (Sidney) South African Bibliography, volume I, pages 38-39, ‘Up to the year 1860, the author, a colonial magistrate, had been in the service of the Government of the Cape Colony, and had filled a position on the bench at Walvisch Bay, after which he decided to devote his career to the exploration of the regions north of the Cape Colony, then a "terra incognita comprising (up to the Congo Region) an area of 2,000,000 square miles." His mind made up, he prepared himself for his lengthy expedition by a series of short journeys in the neighbourhood of Natal, but in August 1863 he decided to make a move north, and pushed for the foot of the Drakensberg Mountains.

After a four months' trip to the Orange Free State he returned to Natal, where he remained till March 18, 1864, when he recrossed the Free State and proceeded westward. He crossed the Vaal at Potchefstroom, and remarks of the Free State that it is a “bleak, cheerless region.” Outspanning on July 26, 1864, he explored the north bank of the Vaal for some months, and by October 30th had penetrated that part of the country which was later on known as Griqualand West. On one occasion he was stopped and turned back by a native chief, whose people “had been so badly used by the Boers” that “they insulted every white man that came into their country.”

There is an account of the settlements in these regions, and the author gives a description of a visit he paid to “Waterboer,” and he states that the Griqua chief “lived in a nice house, well furnished, and the family live as respectably as any Boer family. I was invited to a dance one evening by Waterboer all the fashionable dances were correctly and well performed to the music of the harmonium, which one of his sons played; his daughters were well behaved.” There is some account of the discovery of the diamond fields, together with geological and geographical notes upon the country.

In May 1865 a visit was paid to Mr. Moffat's station, and much information is given respecting Bechuanaland and its natives. Mr. Anderson did a considerable amount of exploring in these parts, and writes in scathing terms regarding the Boers, who, he states, were keeping that part of Africa in a constant state of uproar. He alludes to the “murdering freebooters who were supported by the Transvaal Government,” who, he asserts, have “stamped themselves as a nation of murderers and robbers, and for such acts they are not worthy of retaining the Transvaal as an independent country.” In another part of the volume he states “there is no denying the fact that the Boers, from the time they crossed the Vaal River into the Transvaal, have been a greater curse to the country than Moselekatze ever was.

They advance into native territories, killing people by thousands, enslaving women and children, robbing them of all their lands and cattle. South Africa will not advance in prosperity and wealth until the Boer element is brought to a sense of justice.” From Bechuanaland the author penetrated into the Kalahari Desert (where he suffered severely from want of food and water), and made his way to the boundary of Matabeleland. He next visited Namaqualand, Damaraland, and Ovampoland, spending a considerable time on the Orange River, shooting, boating, geologising, and taking notes of everything of interest. He considered it of the highest importance “that Walvisch Bay and the coast-line for fifty miles north and south of it” should be annexed to the Cape Colony, but the country, soon after, was seized by the Germans, with the exception of Walvisch Bay itself, which had been previously occupied by the British. A description of the physical geography of the Transvaal,together with a brief historical sketch of that country, will be found in the second volume, and there are notes on the towns and villages, and the “ancient stone kraals” in the Marico district.’ 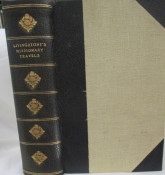 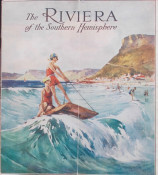 CAPETOWN AND THE CAPE PENINSULA

CAPE TOWN AND THE CAPE PENINSULA