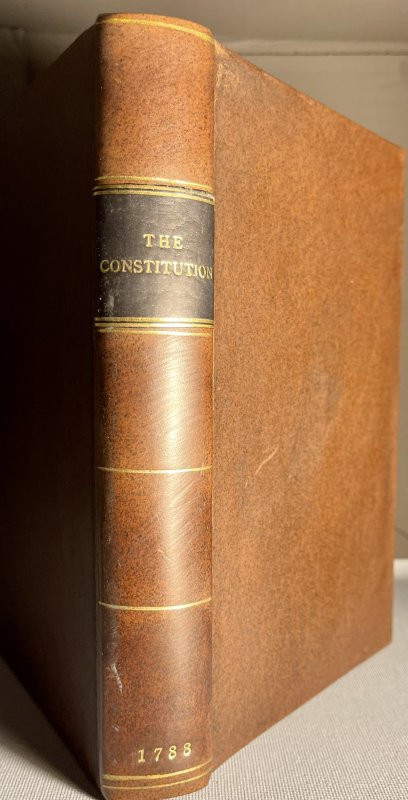 [Debates, Resolutions and other Proceedings, of the Convention of the Commonwealth of Massachusetts, Convened at Boston, on the 9th of January, 1788, and continued until the 7th of February following, for the purpose of assenting to and ratifying the Constitution recommended by the Grand Federal Convention. Together with The Yeas and Nays on the decision of the Grand Question. To which The Federal Constitution is prefixed. Boston: Printed and sold by Adams and Nourse, in Court-Street; and Benjamin Russell, and Edmund Freeman, in State-Street, 1788].  219 pp.   Sabin 45702; Evans 21242.

Title and other leaves supplied in facsimile ; professionally restored and bound in full leather by Starr Bookworks. Facsimile pages: Title; pp 205/6,  213-219, as well as blanks; at least 7 leaves have been restored, some extensively with repairs to text; foxing, stains, etc.  Untrimmed.  Paper has both vertical chain-lines & horizontal chain-lines, as usual.