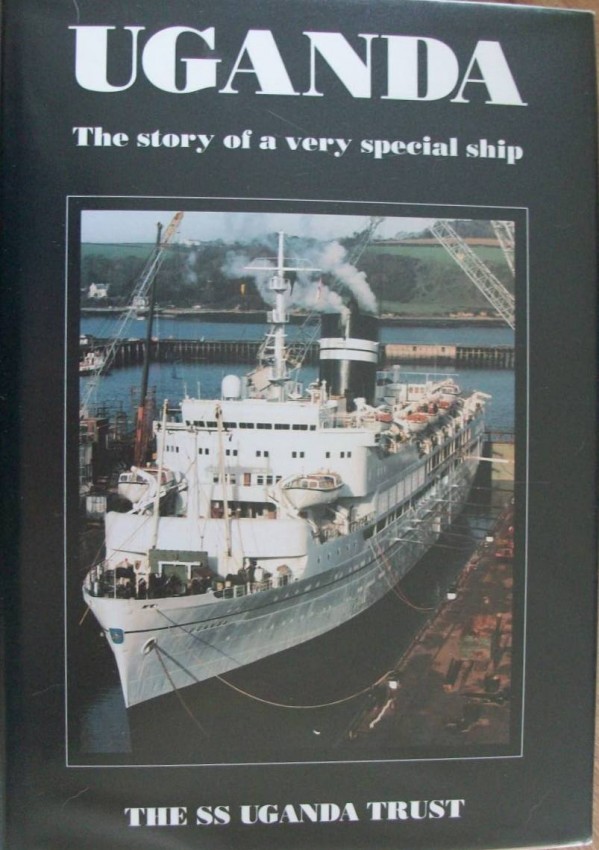 UGANDA - The story of a very special ship.... (Signed & Inscribed by Marion Browning)

From building to sea trials to inaugural cruise July 1952

Hardback with dustcover over black boards, with gilt lettering to spine. Maps to endpapers, inscription and signature. Title. Contents. Foreword. Preface. plus 460 pages text with supporting photographs, data and information.

The introduction of sister ships Kenya and Uganda brought new standards to British India's service between London and East Africa in the early 1950's. Uganda's oversized black funnel with its two white bands became a reminder of home for many an expatriate. For a decade the ships sailed full with cargo and passengers on most voyages, but in the 1960's a combination of containerisation, jet aircraft, political changes in East Africa, labour unrest in the ports and the closure of the Suez Canal brought about an end to the service.

Uganda was converted for her second lease of life as an educational cruise ship in 1967/8. Fot the next fifteen years she carried over a quaryer of a million schoolchildren on cruises based in the UK in summer and the Mediterranean in the winter.

The Argentinian invasion of the Falkland Islands in 1982 brought about Uganda's third lease of life as a hospital ship. This veteran unit of the UK merchant fleet perfomed impeccably and over seven hundred British & Argentinian casualties will forever be grateful to the ship, her ship's company and the doctors and nurses on board.

After a brief resumption of cruising, Uganda was chartered to the Ministry of Defence for her final lease of life as a ferry between Ascension and the Falklands while the new airport at Mount Pleasant was under construction. In this role she achieved a probable merchant record of over five hundred days at sea. Her charter finished after the airport was completed and, after a year laid up on the River Fal in Cornwall, she was sold to breakers in Taiwan where she arrived in July 1986.

This book tells the story of the lives of Uganda with supplementary information about her owners and associated ships. Much of the information is anecdotal, supplied enthusiastically by the people who remember her. The SS Uganda Trust has produced a unique and affectionate study of a ship and a way of life which sadly is no more.