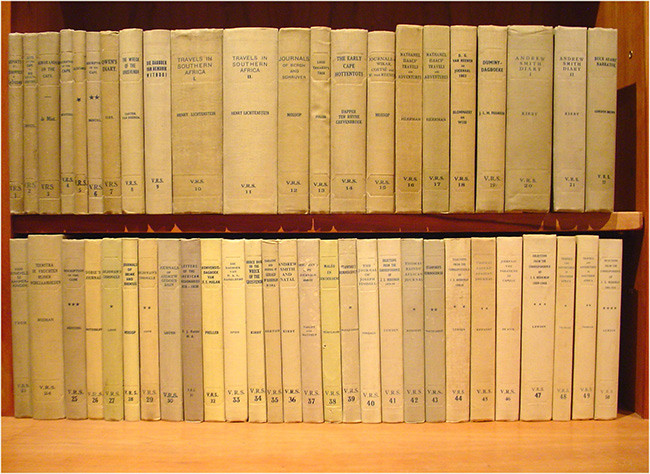 A complete set of the First Series, 50 volumes in the original light grey cloth as published by the Society. The volumes are mostly historical, biographical or deal with colonial issues, travel, exploration, big game hunting, administration, frontier wars, native tribes, etc. Some of the covers and spines are dull and faded and most of the volumes are foxed on the top edge and fore-edges, the contents are bright, a good set.

Hosken (F.W.) A catalogue of books on Africa mainly south of the equator, pages 207/208, lists the complete set, with all titles in numerical order (including some variants of volume 2).

Bradlow ( Frank R.) The Van Riebeeck Society 1918 -1978.‘The first volume, containing the Reports of de Chavonnes and his Council has long been a collector's piece. 500 copies of this first volume were printed, although at the time there were only 54 members.’ Volumes 3,4, and 5 were published in editions of 750 each. By 1926 the Society felt bold enough to publish 1,000 copies of the Diary of Rev. Francis Owen.

From then on, the number of copies printed varied according to the Council's view of the volume's popularity. It was not until 1945 that the Council decided that 'in view of the considerable growth of the Society and the increasing sales of publications to the public, 1,200 volumes instead of 1000 should be printed.' The Council hovered uncertainly between and edition of 1,750 and 2,000 after that.’

Varley (D.H.) An account of the Van Riebeeck Society in the Quarterly Bulletin of the South African Library volume 3 no 4 January 1949 page 119.‘The second volume, a translation of Mentzel's life at the Cape in the mid-eighteenth century was also printed in 500 copies.