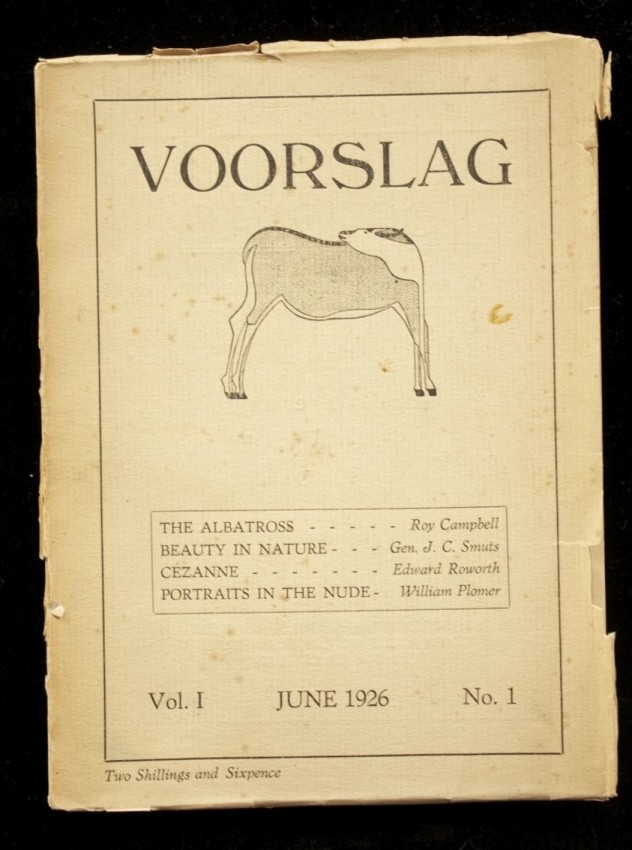 The rare first number of the highly important literary magazine which was produced in mid-1926, near Durban, by the then youthful Roy Campbell, William Plomer and Laurens Van der Post. All three would later go on to establish themselves among South Africa's most prominent writers.

Laurens van der Post was invited to become its Afrikaans correspondent and his articles appeared in this magazine eight years before his first novel, in a string of novels, was published.

Campbell served as the publication's editor for three issues before resigning due to interference from his proprietor, Lewis Reynolds; Reynolds discouraged Voorslag's criticism of the colonial system.

Plomer, despite being a well known author in his day, is perhaps better remembered today as being both the person who discovered James Bond author Ian Fleming, and the English translator of Ingrid Jonker's poems.

The first three issues of Voorslag were re-issued in facsimile and with editorial notes in 1985. The editors Colin Gardner and Michael Chapman stated in their introductory essay that: 'Voorslag had the courage to enter the realms of serious and probing questioning on matters of art, human feeling and society. It is the substance, temper and tone of its involvement which this facsimile edition seeks to convey and re-create for present-day readers and students of South African literature.'

This copy is clean internally but no longer has the rear wrap. 64pp.