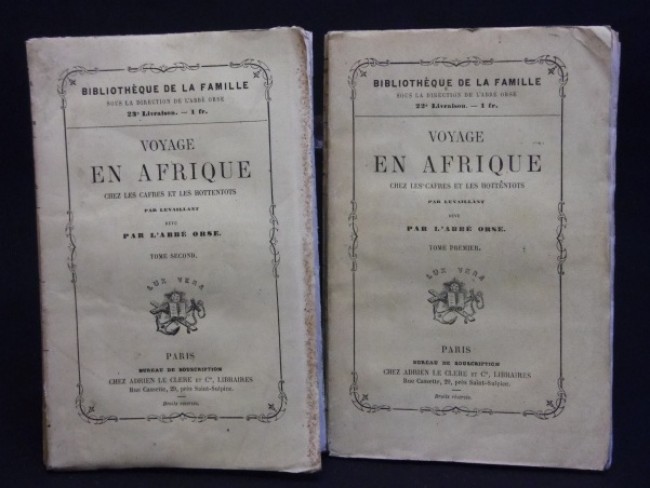 Precious ethnographic and exploration work ''TRAVEL IN AFRICA among The CAFRES and The HOTTENTOTS'' by François Levaillant. Both volumes with engraved portraits of the Cafres and Hotentotes in frontispiece. EXTREMELY RARE TIME RECORD.

Paperback; 18,5 x 12 cm; Collation complete: Volume 1 - 244 pages; Volume 2 - 196 pages; Text in French; CONDITION: Softcover paperback binding is whole and tight, but fragile and worn. Stains on the title pages and the engravings in frontispiece. The rest of the pages a bit bowed, othervise very clean and in very good condition. Overall the condition is VERY GOOD -.

François Levaillant (later in life as Le Vaillant, "The Valiant") (6 August 1753 – 22 November 1824) was a French author, explorer, naturalist, zoological collector, and noted ornithologist. He described many new species of birds based on collection he made in Africa and several birds are named after him. He was among the first to use colour plates for illustrating birds and opposed the use of binomial nomenclature introduced by Linnaeus, preferring instead to use descriptive French names such as the bateleur (meaning "tight-rope walker") for the distinctive African eagle.

As a traveller in Africa, Le Vaillant tended to describe the African people without prejudice. He shared Rousseau's idea of the "Noble savage" and condemnation of civilization. He described the beauty of Narina, Khoekhoe woman in Gonaqua named after a flower in terms that were not to be found later in the colonial period. He was infatuated with Narina, and she stopped painting her body with ochre and charcoal and lived with Le Vaillant for many days. When he left, he gave her many presents but she was said to have sunk into deep melancholia. He named the Narina trogon after her. She was a precursor to Sarah Baartman the Hottentot venus. He also perceived Dutch settlers in a negative way. A brave experimenter, he allowed a Hottentot medicine man to diagnose him when he fell ill and wrote of the successful treatment and cure. By travelling around southern Africa, observing the wild and reflecting upon himself and mankind, it has been claimed that Le Vaillant was the pioneer of a genre of travel writing while also inventing the idea of a wildlife "safari" although he did not use that word of Arabian origin.