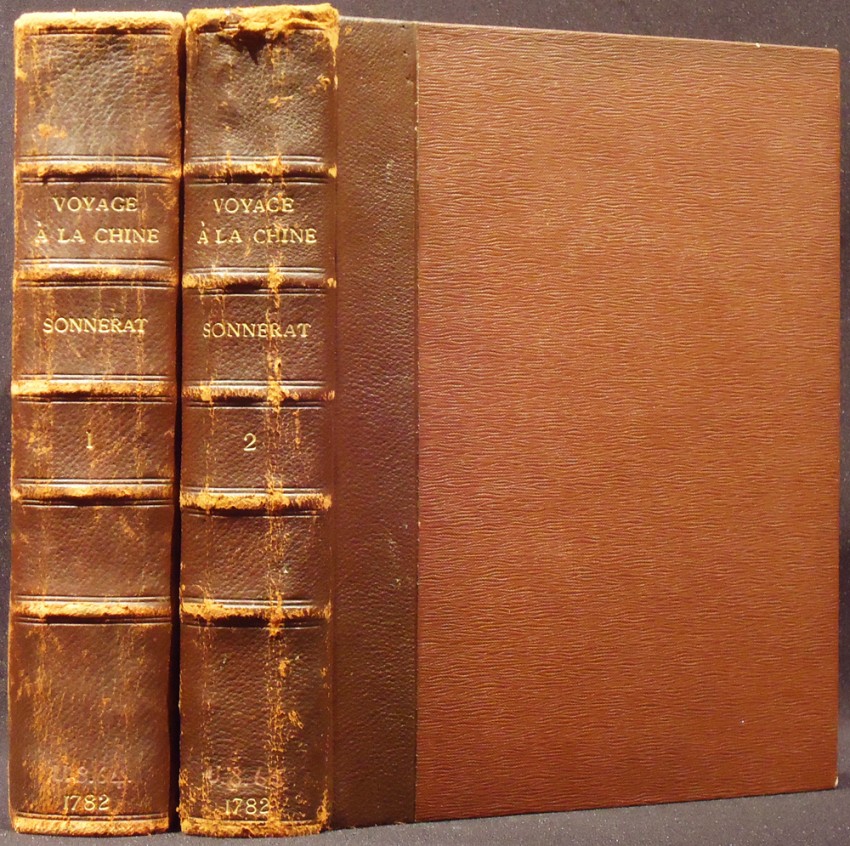 First edition: 2 volumes, I. xv, (viii souscripteurs), 317, (i fautes a corriger). II. viii, 298 pages, 140 engraved plates – 18 folding and 1 folding plan, half title pages, simply bound in later quarter brown leather and brown cloth sides. Bound as a tight back which is causing unsightly parting of the contents at several places and some sections and pages are working loose. The leather is rubbed and top of the spine of volume I is damaged, tear in the margin of the folding plate (Plate 9) in volume I. The plates are browning around the edges, overall the contents are generally bright.

Mendelssohn (Sidney) South African Bibliography, volume 2, pages 337/8, ‘Voyage to the East Indies and China, made by order of the King, between the year 1744 and 1781 in which are discussed the customs, religion, sciences, and arts of the Indians, the Chinese, the Pegus, and the inhabitants of Madagascar; followed by observations on the Cape of Good Hope, the Isles of France and Bourbon, the Maldives, Ceylon, Malacca, the Philippines, and the Moluccas, together with researches into the natural history of these countries. By M. Sonnerat, Naval Commissioner, Naturalist to the King, Correspondent to his Cabinet, and of the Royal Academy of Sciences of Paris, and Member of the Academy of Lyons.’

‘The author was born at Lyons about 1745, and made several voyages to the East Indies, &c. He spent many years in travelling in Mauritius, Bourbon, Madagascar, New Guinea, and other places, and acquired a rich collection of natural curiosities. On his return to France in 1781 he published an account of his travels, in two quarto volumes, which was followed by another edition in three volumes, issued in the same year. According to Theal (History of South Africa, 1691-1795), "Sonnerat called at the Cape on several occasions, and in 1781 spent some weeks there. He is mentioned by other travellers of the time, who considered the meeting of a man of such eminence in the study of natural history a noteworthy event. In the volume referred to (the Dutch edition) there is but one chapter upon the Cape Colony, and it only covers five pages. These are pages of correct information...." In the first quarto edition there are four pages dealing with the Cape, and there are two double page illustrations of "Caffres" and "Hottentots." Sonnerat mentions Colonel Gordon, the Commander of the Dutch troops at the Cape, and remarks that he was a most interesting man to know, and had made three journeys into the interior: he states that he was the only person to go to for information respecting the original inhabitants of the country and its fauna and flora, and he observes that he hopes that he will be enabled to obtain much information from Gordon's journals when published.'