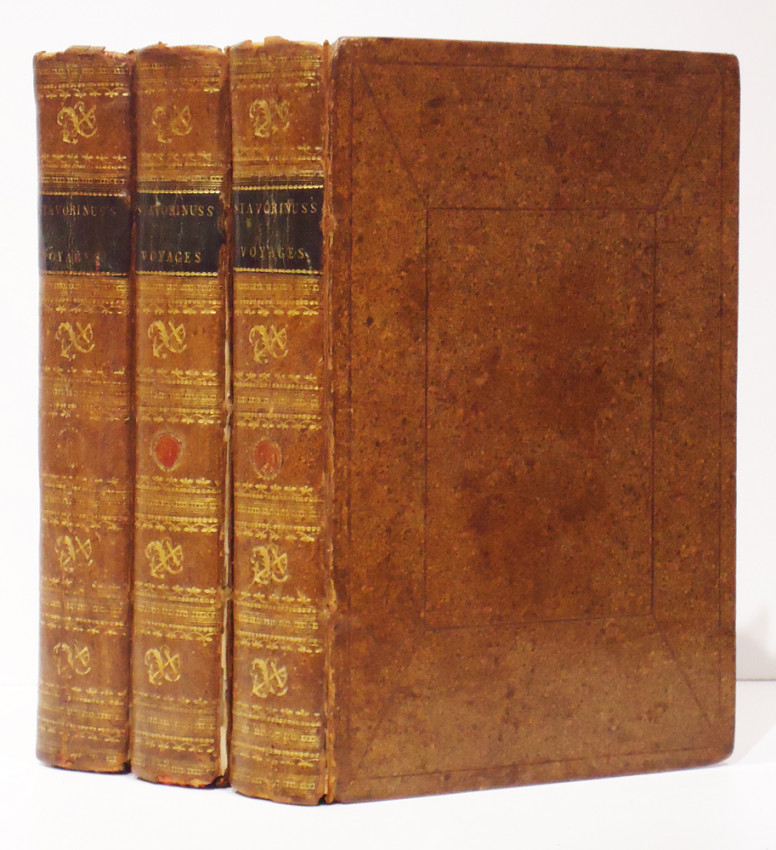 VOYAGES TO THE EAST-INDIES;

By the late John Splinter Stavorinus, Esq., Rear Admiral in the service of the States-General.

Translated from the original Dutch, by Samuel Hull Wilcocke.

With notes and additions by the translator.

The Whole comprising a full and accurate Account of all the present possessions of the Dutch in India, and at the Cape of Good Hope.

Illustrated with maps in three volumes

Three volumes: 572 + 512 + 598 pages, 4 folding maps, contemporary tree calf with black title labels gilt and gilt decoration on the spines, and the edges of the boards - the leather is starting to wear at the tops and bottoms of the spines and along the edge of the spine of volume 2, sprinkled fore edges and bottom edges, a good set.

Kennedy (R.F.) Africana Repository, pages 60-61. Jan Splinter Stavorinus was a Post-Captain in the Dutch Navy who was given permission to make two voyages to the East as a Captain in the service of the Dutch East India Company. He later became a Rear Admiral. He was at Cape Town from 18 November to 12 December I768 (one of the first things that he did was to climb Table Mountain) and on the return voyage from 1 January to 9 February 1771. In the account of this voyage he includes, ‘Observations respecting the Cape of Good Hope' as Book 1V (pp. 535-72 in the English translation). On the second voyage he anchored at Simons Bay from 13 July to 3 August 1774, and from there visited many places near Cape Town; on the return in I778 he was at Table Bay from15 March to 2 April, and gives further particulars of the Cape community. As an appendix there is an abstract of the Herbarius Vivus, or Herbal of Henry Bernard Oldenland, Superintendent of the Company's Garden at the Cape.'